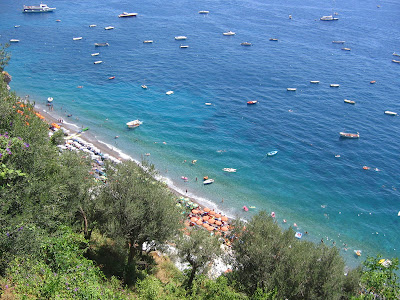 There has been a lot of talk lately especially here about the eroded state of Fornillo beach. Wild seas in March this year, as in any year, have managed to eat away at another chunk of the beach on the left hand side. Naturally the said part, is the public area . When I first arrived at Positano over twenty years ago, I, being used to the endless unpopulated beaches in Australia, was overwhelmed by the umbrellas placed sardine style all along the beach. I quickly found my more secluded niche on the extensive public side of the beach. Having young children at the time and not wanting to cart an umbrella up and down the steep Fornillo stairs twice a day, I adopted a rock which served for shade on both sides and under the noon sun. If I decided not to return home for lunch, it even had a space for shelter underneath. This rock for quite a number of years now has lain right on the edge of the water. This year it is in the water. The sea has come in several metres onto the beach. The private beach 'Stabilimenti' have compensated in their turn by slowly enroaching into the public side regardless of petitions. What used to be a walk across the public beach, stops abruptly and is impossible to do without climbing over boulders. Any sand left is covered by rocks.

It is difficult to imagine that anything will be done. There are so many real problems in Positano that are not addressed or skirted around. Lack of funds; lack of permits; too complicated are common excuses. Illegal buildings continue to be built. If someone reports them, the local police will come and put seals on them. Behind the seals, the work continues. Retaining walls in gardens are built. Once the important work is done, these walls sprout windows and doors. Too late. I have returned to Positano to see villas form on the sides of the mountain. Huge scenic windows put in where a garden wall once was. Why don't people say anything ? Are they afraid of retaliation ? Is Positano such as close knit community that people turn a blind eye not wanting to get involved ? Even if it is to the detriment of the place they live in ? Some of this illegality is in very public places -does even the Council turn a blind eye ? You only have to look at Fornillo beach and wonder why these eye sores are still left standing.
by Rosa

The beaches in the UK aren't nearly as beautiful as you have in Oz. However, you can just pitch up with your own kit and picnic, sit wherever you like and enjoy the rain, wind, cold weather and sea. I love it! (Not a sardine in sight.)

Casalba - I really miss that ! You can do it in Positano too but only in winter...
I'll post photos eventually of our beach in Melbourne.