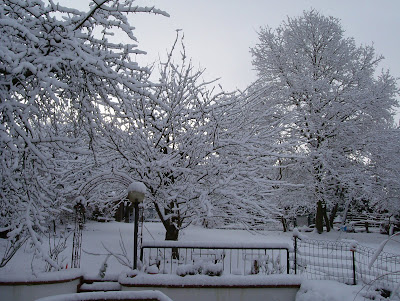 As Christmas hits my home town in Australia,
I'd like to wish you all a very Merry Christmas and a New Year full of good health and happiness.
Thank you for being so encouraging !
by Rosa 14 comments:

Getting things into Perspective. 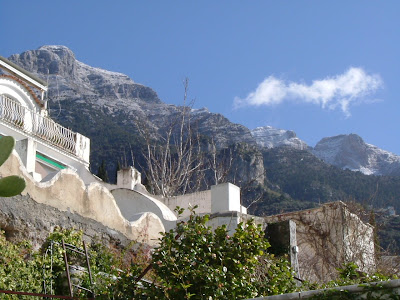 I have had more than my fair share of wallowing in self-centered pity these last few months as the nightmarish quality to this year, where I lost my mother to breast cancer and had my father lose a kidney to cancer, has taken a recent plunge in what feels like the descent to hell.

Everything happens for a reason I try to tell myself, and as my own health suffers too, I try to look at the whole picture rather than concentrating on the negative. But it's not easy.

I came across a post the other day where they asked themselves where they'd rather be.
I'm in Luxembourg at the moment but I'd rather be in Positano.
If I was in Positano it would mean that I could concentrate on the holidays.
Christmas would be by the roaring fireplace lit only if the breeze came from the sea and not from the mountain. A breeze, even slight one, from the wrong direction, means a room full of billowing smoke because the fireplace, it seems, was built more for esthetics's than practicality.

An oversized fresh pine cone, closed unto itself would release the scent of incense as it warmed the resin amongst the woody petals. After hours of sitting prettily next to the embers like a closed flower bud, it's petals would slowly unfurl and open to the pine nut treasures under each one. With a nut cracker or even a hammer to split the nut, we would expose the tender kernel . It's a tedious job but there would not be much else to do to while away the time.

We would buy the small parcels of lemon leaves dried and tied with a raffia string. Leaf by dried leaf the handcrafted parcel would be opened to get to the contents inside. The layers removed revealed the dried raisins, candied Cedro (lemon) and candied orange peel which had taken on the perfume of the leaves in which they were wrapped and dried. All locally grown.

Split chestnuts , would of course sit on the coals in their rusty holed pan, passed down from the war times, roasting away with the occasional pop and splutter from fresher logs. 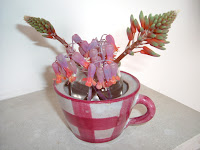 In winter, the house is not heated. We transfer a small table into the sitting room, put sand filled snakes under the doors to block the drafts and eat and live in front of the fire.
The house is at it's iciest in the mornings, so sweaters are pulled over our night clothes before we come down for breakfast.
Oranges from the garden abound and fresh juice is always present. Smaller oranges are carefully spiked with cloves and set in strategic places to waft their perfume our way. Mandarins imitate their parent trees in the gardens as they bend the boughs of a the small Christmas tree set on a table in the corner.
We have a sort of sun room coming off the terrace and welcome the pink sunrise over the edge of Praiano in winter because it means that we might go outside and warm ourselves up soon, as well as open all the doors and windows to dry the mustiness inside.
Salsicci (Italian sausages) with fennel seeds prepared lovingly by Carlo our butcher in Positano, would feature heavily in our menu there, accompanied by cime di rape or bitter broccoli lightly boiled then sauteed in light olive oil with garlic and peperoncino.
Le zeppole, a specialty at Positano of sweet fried dough with sultanas, orange and lemon peel drizzled with local acacia honey would arrive from well wishers by the plate full, and figs dried during summer and stuffed with chocolate and nuts before soaking in liqueur would be the after dinner delight.
Sun lit walks on abandoned beaches in the afternoon with the smell of wood smoke in the alleys on our return would be all the exercise we'd need after meals. No worrying about fighting crowds in department stores or negotiating icy roads.
I really wish I was there.
My husband read an article in the paper about the Maldives slowly disappearing and said haven't you always wanted to visit there? I answered that I'm so unlucky lately, that the Maldives would probably disappear under a tsunami because I went there.
My eight year old son piped up " But you are lucky Mum , you have me. No one else has me !"
I really am blessed.

Bring Italy to your Christmas!

Christmas is just around the corner. For those who haven't yet thought of gifts for family and friends, I have some suggestions from two expat blogger friends in my part of the world whose creativity and resourcefulness has resulted in exceptional products for luxuriating and dreaming without breaking the budget.

The Amalfi Coast, as any of you who have been here will know, is a place which touches your soul.
It's brilliant colours, dramatic coastline and genuine down to earth products made with the traditional methods are a way of life here.
Nicki, who many of you will recognize from her blog, has created beautiful, handcrafted soaps which would look divine in your bathroom from the natural local products in the area. The colours reflect the ocean, the gelato coloured houses and the rocky mountain morphology. They are a feast for your eyes and your skin.

Take a look for yourself at Saponissimo: Etsy for the States and Dawanda for Europe.
You won't regret it!


South of Rome is a newly discovered blog for me by a fair lady who moved to Naples from Sicily.
The blog is well worth visiting and informative with gorgeous pictures as is her published book In Etna's Shadow just recently available on Amazon. For all you lovers of Italy's largest island, this is a travel book with a culinary twist to treasure. Karen offers a discount if you order from her blog. Do drop by and see what she has to offer for yourselves.

A Congratulations to both Nicki and Karen !
by Rosa 8 comments: