It's been a rainy season on the Amalfi coast and with the constant water there are always the inevitable landslides along the road side. The land slides where boulders or rocks fall on to public ground mean road closure at the worst or alternative traffic at its best, often creating a physical barrier for the inhabitants of villages effectively blocked on both sides or upsetting routine for higher school students from Positano or Sorrento unable to reach their school in Amalfi. In winter going around by ferry is not feasible and so locals have no choice but to sit it out in their 'island' of isolation till the road is cleared and reparation done to the cliffs.

Boulders and rocks of course, aren't confined to falling on public areas. Fornillo, where we are, is a high risk area and our place will probably end up on the beach sooner or later. Dislodged rocks and large boulders decorate the pathway that cuts across the cliff to the Fornillo tower but up to now, no nets have been attached to catch them as its not a high priority tourist area.

When I first arrived in Positano twenty two years ago, we could walk along the cliff path, take a hop, skip and a jump over a low gate behind the tower then continue our way down to Remese beach in winter to see the sunset, otherwise only accessible by boat from Fornillo beach.

I tried taking this walk with my young son last Easter, but the steps were in such a dilapidated state and overgrown with tree roots and weeds, with the wall crumbling in parts, that I became concerned for his safety, notwithstanding that I was grasping him tightly by the hand and so we turned back. 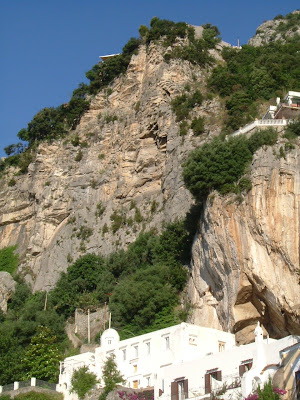 This cliff walk begins behind a Villa described in this letter in Positano News . You'll probably recognize this area in the photo from a previous post (yes, they have that lady for a neighbour).

I had exclaimed my delight when I first saw this Villa from afar years ago with it's period decorations and romantic domed tower, and recall that my mother in law had then condemned the house as being dangerous because of it's position under the falling rocks. But little did I know of the extent of the damage till I read the letter.

The author of this delightful New York letter, whom I've not met despite the fact that she rented a house overlooking ours one summer with her family, described visiting this Villa with the intent of buying it twenty odd years ago and finding a hole in the roof and a boulder on the bed. The price was close to astronomical at the time (a bedrock is unique!) so they decided to forgo the dream and it was later sold to others.


Some dream it would have been, as it's damp position in the hollow of the mountain meant that lots of work and paint, paint and more paint was lavished on the Villa and I saw it up for sale again last year.


In hindsight, the writer admits that they were starry-eyed youth at the time and that they probably were wise not to take on the venture of renovating the Villa even though money had been the reasoning factor then. The letter reads like a story. Many have had a dream built out of ruins and have had the courage to persevere through the years little by little. But not everyone has had the wisdom to renounce from the start and not regret it in the long term...
Read it, it's wonderful!
by Rosa

What a beautifuly written letter! It just goes to show, the best life is one lived with no regrets :)

What a lovely letter!

Beautiful story and letter! It is always fun to find out a bit of history about the buildings we admire on a daily basis, isn't it? Thanks for sharing!

Another lovely post and so was the letter. Thank you!

ps. lm returning to the coast this year so it would be lovely to meet you at some stage.

What makes you smile? Come and enter the Under the Sheets giveaway contest.

Sounds like Bedrock from the cartoons, a bed made of rock. I am looking for the producer of the fish plates you showed in your lemon dessert could you tell me where you got them? Thanks barbara@latavolabella.com

What a lovely story! It's great to hear that there are so many of us out there filled with dreams that may or may not come true-but it's the dream that keeps us going!
I love to hear your tales from Positano!

That villa must be worth a fortune.

Loved the title of this post. You're right, it was a lovely letter. Someone had a close escape.

Cleo- Will be happy to organize get together !