'Do you think someone could put their hands in our mail box and pull out letters ?', my other half queried.

'Why would they want to do that?' I replied.

'Apparently the witch has other tricks up her sleeve now.'

Which witch? Fornillo, a historical part of Positano has it's own residential eccentric who lives a mostly nocturnal life. Her meandering barefoot, rain or shine around the stairs, roads and gardens of the area are well known to all. Not only does she save on shoes but she is nimble -footed and light-fingered to boot. 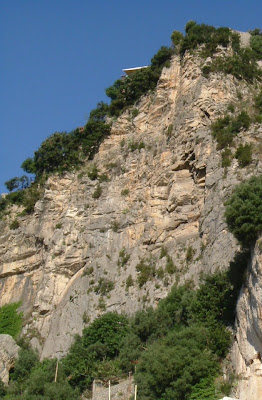 For many years she has taken over a narrow patch of terraced land which is not her own but public property and cultivates her orto (kitchen garden) under the menacing jutting boulders. She raises chickens and has at least two roosters who crow from four in the afternoon to five in the morning. From the way sound travels in the conch of the mountain, the noise seems to come from right outside our bedroom window. With time, we have grown used to it, so that its no more disturbing than the sound of the sea.

In summer, her impossibly green lettuces line the dangerously crumbling public path that leads across the Fornillo cliff face and her herbs and pumpkins spread vertically in pockets of compost ever downwards towards the villas below, reachable only by her makeshift steps.

That she is an creative and accomplished gardener there is no doubt. But it would be undermining her talents to stop here.


For this Strega (witch), as we have nicknamed her, dips her hands into other people's gardens as well. Vegetables awaiting the table of their owner's disappear overnight. Melanzane (eggplant), zucchini, tomatoes, just ripe for the picking are magically transferred elsewhere to the dismay of the rightful harvester.

It seems that she bears a long held grudge against us too.
Long ago, she asked my other half if she could cultivate our outside garden. My other half, having heard about her canniness had not given his permission, using the excuse that it is 'the wife's garden'. Obviously this didn't sit well with her, because our gardener began telling us of vegetables that he'd planted that had gone missing, apricots that he suspected were picked in his absence, and oranges and lemons which were taken.

'Eat the things in the outside garden first', he began telling us. 'They won't be there on your return.'

Many years ago, when we still enjoyed daily door to door rubbish collecting, I had woken very early in the morning to go to the bathroom parallel to the public stairs. In the very dim morning light, I just made out the shape of a shadow through the frosted window, climbing over our garden gate. I mentioned it to my other half on going back to bed thinking it was probably the rubbish collectors who had dropped something. My other half peered over the balcony railings to look at the stairwell. Then a moving shadow caught his eye in 'my' garden.

I suddenly heard a stream of Neapolitan cursing from him.

'She's crouching underneath the zucchini plants', he whispered back.

To make a long story short, after a good half hour of shouting ('Mariola' - Neapolitan for thief) at her immobile figure ducked under the immense zucchini leaves from the safety of our balcony, at the break of dawn she very quickly managed to scramble lightly up a neighbour's wall and take cover in their garden. I must mention here that she was close to sixty at the time!

On other occasions I had planted heirloom Mortgage Lifter tomatoes and was very proud of their size. I lovingly laid fresh compost at their feet and had thought that the pick of the crop would be perfect in the morning. Of course it was no longer there but the bare footprint was perfectly outlined on the compost next to it.

I've given up on growing vegetables out there, but it's still hit and miss with the fruit trees.

Her prowess is famous all over Positano.
One man related the tale of how he was unloading a van full of five-litre tins of olive oil for one of the shops. He had placed them on the roadside in order to move the van out of the way. Then he realised that the woman had picked up a tin, placed it on her shoulder and was calmly walking up the steep stairs to her house.

Another recently, while doing (unofficial) work to their house at 1 am at night, wondered why she had stopped and was just watching them .
Eventually he asked 'What are you doing here?'
'I want a lift up to Montepertuso' she said. She had a metal casing from one of the drain covers at her feet. It had been too heavy for her to carry. She now in her mid-seventies.

Her weathered face and stealthy gait still sends alarm bells ringing in my head when our paths cross unexpectedly in the alley behind our home, and I know now to avoid going in the early morning lest I should encounter her with her bulging plastic bags of vegetables.

Nor do I take the scenic walk along the cliff face under her garden in the times of the day in which I am likely to see her.

She'd probably mistake me for a thief... 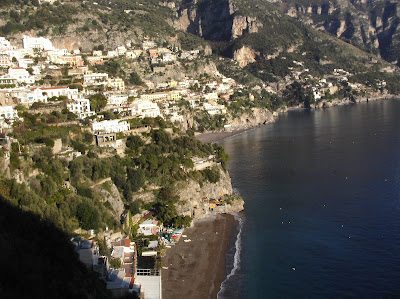 This post is dedicated to Paul Anater who wrote of Positano:
"I saw more quirks and curiosities in that ancient little town than I thought were possible".

Thank you for that! It was really nice to read albeit the subject of the story isn't. I miss the blogs of summer and that kind of took me back to it. Soon enough she will be gone and I'm sure there will be someone else to take her place with their eccentricities and quirkiness.

She is scary! And she definitely does not limit to Positano. She does the exact same thing all over Montepertuso and Nocelle too!!!
That witch.
dollyna

Wow, I seriously thought you were going to say at the end 'this is a made up story or a legend of your town'. To think that actually happens is funny (well I wouldn't think it was so funny were they My vegies either!).
At least she gave you a good blog topic :)

What nerve she has. That would be frustrating, after taking the time and effort to cultivate, to have the gems taken by someone else.
Maybe now that she's been "outed" people will start being more vigilant for her "handiwork."

You made my day! I was reading along with a smile on my face and just when I didn't think it could get any better I came upon your dedication. I am honored, grazie mille!

it's nice to get a glimps into the quirks of Positano. It's part of that small town "charm" (charming for me, probably not for those whose vegetables are being stolen!!)

I am just shaking my head with disbelief...and amusement. We used to have a quirky neighbor around here but at least he didn't steal...he only liked to walk right up to our property line to see what we were planting. How I couldn't stand that nosy man! Of late I haven't seen him around at all, so either he kicked the bucket or my novice garden was no longer of interest to him. Can't you just put a skull and crossbones sign in your garden? ;-)

I thought you were tell in us a "ghost" story...how scary..yet funny in a way..but I suppose not if it is happening to you.

How funny. We had our own Stega in Sicily- but I liked her. She had a sad little story and I didn't know her to steal as she was from a well to-do family.

HA! I have a picture of her in my mind looking like those ugly old bare foot La Befana dolls. I cannot believe she jumped your gate and stole! You should leave some plastic fake fruit out in the yard so she gets a taste of her own medicine...but then again she would be too clever to fall for that old trick.

That was another fantastic story of your wonderful town. Please keep sending these great experiences you have. you write so well!. Thanks for sharing , and count those veggies witchy woman around!!

Lucia -I am longing for summer!

Dollyna- Everyone knows it but nothing can be done about it!

Monika- I suppose I 'should' thank her for that :)

C.C.Linda- It's not so much the vegetables as the fact that she keeps her eyes on us and knows exactly when they are ripe.

Paul- You are so welcome! You are right in that Positano seems to attract oddities.

Anait- I believe her antics have estranged her from her family. Her son still reprimands her though!

Rowena- Nosy neighbours are everywhere! Voodoo dolls might help. I beleive Lucia (above) has some ;)

Anne- It is funny to tell but not to meet her!

Sally- When I saw her beneath the zucchini I was too!

Leanne- She doesn't have quite as many 'Sottane' as the Befana, but a broomstick wouldn't look out of place next to her!

Chef Chuck- Thank you! We sure do keep a vigil eye on things now!

Ciao Scintilla! I just discovered your blog, and I have been enjoying reading it so much. How have I missed you online before?? I am American, but I am living just above Amalfi now. It is great to meet a fellow blogger so close by. Your photos are beautiful! I will check your blog often now. Thanks for the great story about your local stregata. Someday I will have to tell you about the characters in Scala... they come from another time! :-) Ciao! Ciao!

Ciao Laura- I'll look into yours regularly too. You know that your characters and mine may very well be related...

Braja- You've got snakes to contend with. Which is worse?

Ciao Scintilla! Thank you to you as well for stopping by my blog to say hello. Look forward to following your blog and checking out the links you have. Ciao ciao!

I love all of your stories - this one was a little frightening, but very interesting!

I miss Positano so much! I was lucky to be there last September while visiting friends in Rome. I spent only 2 days there but I will definately be back. Thanks for your blog and beautiful pictures : )

Cathi -Thank you. I didn't mean to scare you!

Anon- Thanks for dropping by! Positano does tend to 'stick' to you...

Hi Scintilla, I remember her know from last year. Sounds like her climbing abilities are good. Spider gram related to Spider man!
She is the seasonal thief or at least I hope it's just seasonal! Thank so much for sharing your story!