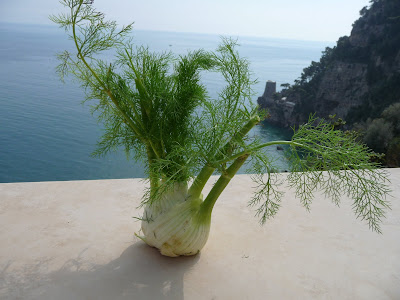 When I was in Positano for Easter, I went overboard on the seasonal vegetable front. I'd buy bags of Broccoli Rape to have with the local sausages, lots of fennel and artichokes too. Even the red capiscum were much less expensive than in our Luxembourg summer prices.
Sometimes, there is a pensioner who likes to help out at the shop, rather than sit on the wailing wall at the entrance to the town with the other pensioners and unemployed. He's been nicknamed the Americano probably due to the stint he did in the States.
As soon as I approach, he comes forth, plastic bag in hand, ready to serve me.
Naturally I tell him that I want to have a look first and then start helping myself.
That day I had 'stuffed artichokes' in mind for lunch. Finding out that the price was obviously lacking in zeros, and was still in cents (!), I picked up a bag and chose the firm round ones having being assured, by my other half, that they were tenderer.
L'Americano wanted to strip their foilage and clean them there and then, but I have a composter at home so I said to leave it. Seeing that the bag was full, he then asked how many I'd picked.
I answered six.
'Ma che brutto numero!!! (What an awful number!!), he screeched.
' I carciofi si comprono sempre in numeri dispari ! ( Artichokes are always bought in odd numbers!).
I replied that 'We are six in the family so what could I do about it!'
I wasn't prepared to cook one for the dog. Nor was I going to create a bridal bouquet out of them. So six was fine.
He trotted away disgusted. I can just see the thought bubble. 'These stranieri non capiscono niente! - foreigners are clueless people! '
L'Americano should know...
by Rosa

Okay, all I can think of right now is stuffed artichokes! Broccoli Rape and sausage...lol...and why aren't I living somewhere in Italy!

Hmmm...I am always hesitant to shop in those little stores with no prices on them. I am worreid I would get ripped off. They must know you, or you maybe have a local sounding accent. My aussies twang and backwards italian still gives me away!

Quite funny to read, although I'm sure irritating at the time to deal with!

I LOVE your photography!

LOL! Because whiel reading I could picture the whole scene going on...
HA. BTW nobody helps me when I go there.
Dollyna

Hi Scintilla, like the person commenting above...I can just imagine the scene :-) it does sound great though, and wow lots cheaper than Luxembourg...I noticed prices on the French markets were cheaper than ours ..and looked a lot better too!

Ciao Scintilla! The fruit shops on the coast can be quite an adventure at times. It took awhile before the two ladies that own the one near where I live warmed up to me. It didn't really happen until I had a streak of impressing her with picking things from her garden and exclaiming how good them looked...and they were good! Now she is sweet to me and gives me great cooking tips when I buy something new. Just takes time with some people I suppose. But that artichokes in odd numbers is a strange one! I love artichokes and would have taken two for me! :-) Thanks for sharing the great story!

Sounds like a interesting store!
By being the early bird you get the worm ! The freshest and the best!
Enjoy:)

That picture has me craving for fennel!

OMG!!! I just made some artichokes last weekend. We I bought them from our fruit and veggie lady I asked for SIX and she refused and gave me SEVEN!!! Too funny! I just thought she was gifting me an extra ;) HAH!

This post made me laugh...so funny about the odd-numbered artichokes. I guess I "don't know anything" either...b/c I normally get 2 :)

What a great story.

Nice post. I love the places where the prices are still in lira...

you now have me waxing poetic about produce shopping...i cannot *wait* to get back to the bel paese next month!!!

Ciao,
Yes fruit shopping is certainly an experience on the coast :)
I had a similiar line rattled off to me after shopping their quite regularly too... Im surprised you got that after all the many years you have been in Positano.
Oh, well it always adds a little spice to a shopping trip.. BTW, that dish sounds delicious!

Just found you through RubberSlippers - what a lovely blog you have. Have Rssed you & look forward to what's next.