Sorrento. Chaotic, loud, irreverent, as a local I’d only visit with a purpose and fight my way back home.  The pretty alley ways were full of tacky souvenir shops with handwritten signs assuring buyers of cheap wares made in Italy.  An occasional local with bags of vegetables battled their way through English crowds dressed in shorts and flip flops,  past an art shop selling prints of the Coastline and a 3-d picture of a crucified Christ who opened and closed his eyes as we moved.
I had long decided that Sorrento was not for me.  I’d come only for clothes shopping and was most relieved to get back to Positano. Especially because the Sita buses heading towards the Amalfi Coast in summer were nigh impossible to board because of the tourists. The poor devils left on the pavement in the sweltering sun would have to wait for the next bus in two hours time or get a taxi.  It was a nightmare for me every time. 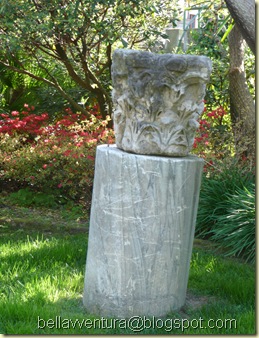 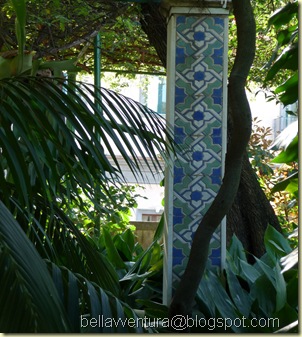 But when I accompanied my daughter to her driving lessons this April, it was the shoulder season in Sorrento. The Easter crowds had just died down and as I strolled along the streets I spied a treasure just off Piazza Tasso.
Through the curtains of wisteria (you’ll sense a recurring theme here) a garden of Eden beckoned me into its forbidden grounds. It was the  Hotel Vittoria Excelsior.  A Grand Hotel overlooking the Bay of Naples, the private gardens of which the Porter graciously gave us permission to visit. 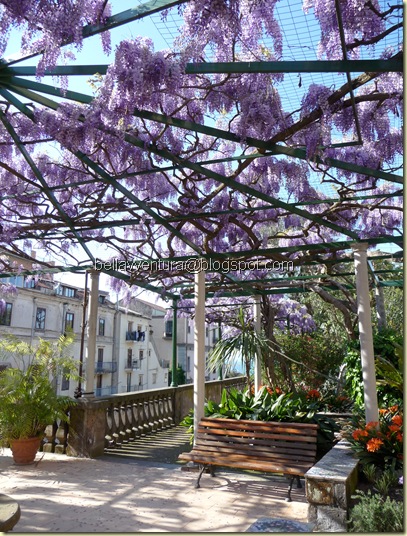 The stately Hotel had wisteria clad arbors running the length of its grounds. Secluded niches  housed in rose arbors gave promise of a sweet May flowering. I was awestruck as this was exactly what my dream garden in Positano should look like. 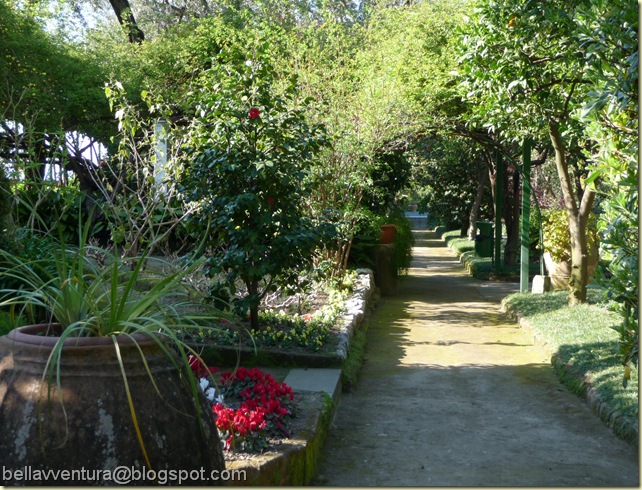 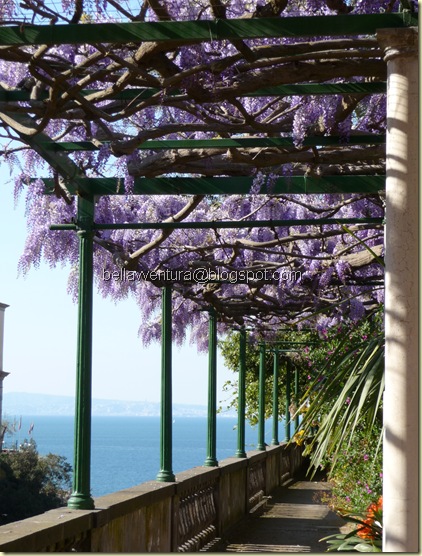 Following the pergola to the seaside, we admired the view of the volcano looming over a very short expanse of water and averted our eyes as clients from the hotel emerged wearing only plushy bathrobes from the hotel’s Spa and pool service. 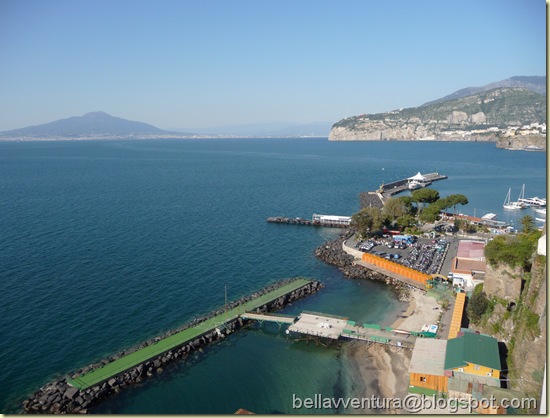 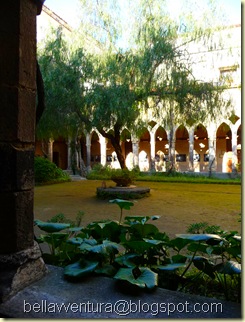 My husband then decided to show me something very special and we zigzagged our way along the little streets until we were almost at the Belvedere over the Port. He suddenly took a sharp right turn through a doorway and inside was the most exquisite cloister ever. The  Cloister of San Francesco, just oozing romance, was all for us and a handful of French tourists.
Of course, there was wisteria here too. 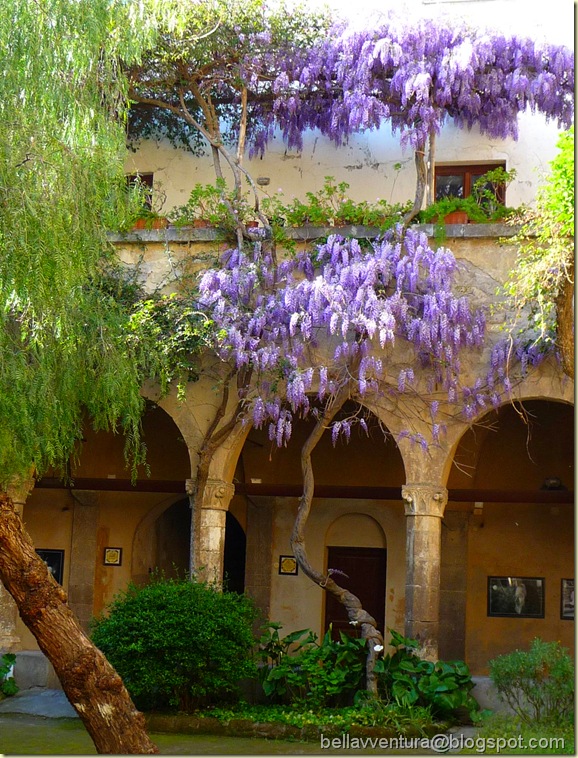 Making our way back past the tacky souvenir shops in the pretty little alleyways as the sun became lower in the sky, we bought up on the false-real Italian scarves and trinkets and breathed in the relaxed tourist spirit that Sorrento had offered.
Oh, and I made a note to myself to send my father here to play cards next time he visited ! 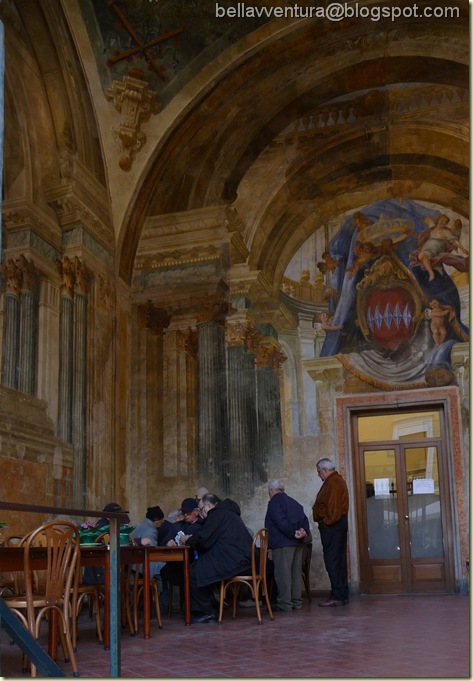 Thanks for the revisit to Sorrento. Though most of it's pretty trammeled by package tourists, there are still some great spots. It's all about knowing where to look. It's funny that the Excelsior Vittorio is right int he middle of the tourist strip but you'd never know it from those gardens. Next time you're there, have dinner at Caruso. The best meal I've ever eaten in my life was in that place and it's Sorrento of all places.

thanks for the walk through Sorrento and the fabulous wisteria...that paints the hillsides afresh...

Hello Scintilla.. wow thanks for these wonderful photos... !

I would definitely get you as a guide.. my husband and I do not like the tourists spots, unless it is for something so spectacular.. we love being amongst the locals.

A great interview with Pat :-) it is excellent, .. thank you.

Thank you for the tour - it was fabulously beautiful! Have a gorgeous day! xxoo :)

Can I come live with you?

I really feel like visiting Sorrento now, you have confirmed my belief that it can't all be tourist hell..
By the way, www.blogs.com asked me to compile a Top Ten Secret Italy list and
I included Bell'Avventura. Great blog! (http://www.blogs.com/topten/top-10-secret-italy-blogs/ )

Just beautiful and I really love the wisteria.

beautiful photos! thanks for sharing.

Sorrento is lovely when there are no tourists...but lucky me got to live there during the height of the tourist season! Hotel Vittorio is lovely too. I used to work with that hotel, and would often go and walk through the gardens, or go onto the terrace with the amazing views!

I love to read about anywhere on the coastline from Sorrento to Amalfi.
Yet more beautiful wisteria, not sure my wisteria photos are so colourful, it must be the sunlight!

Wow thanks for these wonderful photos. I do not like the tourists spots, unless it is for something so spectacular.. we love being amongst the locals.

I quickly decided that Positano > Sorrento in every way. But in subsequent visits I have had a more pleasant time in Sorrento. I've also had a few horrifying trips where I just wanted to get the heck out of there because it was choked with tourists drinking afternoon cappuccinos and tour bus drivers with a deathwish. I think I have to be in the right mood -- and it has to be March or early April.

Thank you for sharing your own experiences in Sorrento. I envy you and how I love to visit there also together with my husband.