Positano hiking– Teetering on the Brink of a Mountain 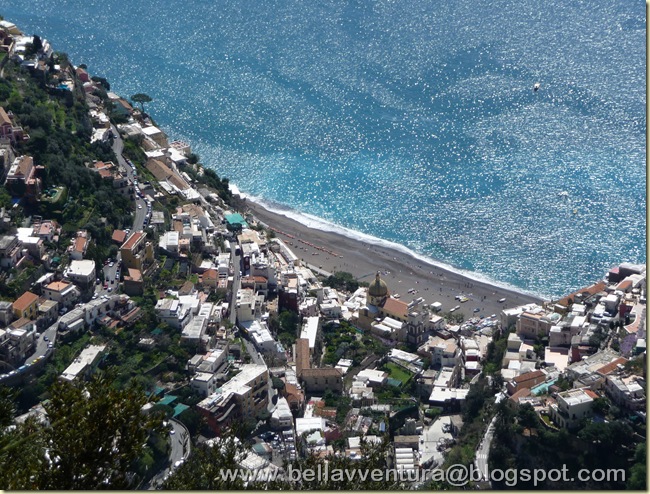 SANTA MARIA DEL CASTELLO
‘Get up you lot, we’re going mountain climbing!’
My sleepy family was coerced into getting out of bed at 9:00am on a school holiday and amidst grumbles and more importantly, cries of ‘where are we going to eat?’,  I managed to have everyone on the Montepertuso bus for 10:20.
Unlike my husband who had often visited Santa Maria Del Castello, a small village at the tip of the mountain, with his aunt and company armed full of homemade food and wine, we had only brought water for the dog.  An elderly lady (my taxi driver’s mother) kindly pointed out the right stairs to take on Via Corvo just above Chiesa Nuova and we set off under a beautiful cloudless blue sky in early April. 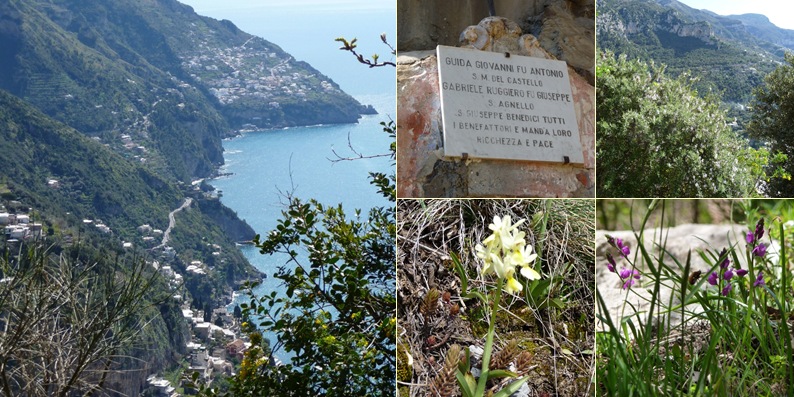 View Full Album
The steps and paths were steep and twisting upon themselves so that we were weaving in a vertical direction up one side of the mountain. Scrawny plants of thyme crushed underfoot on the wilder trails and large rosemary bushes dotted the cliff faces ready to burst into flower. 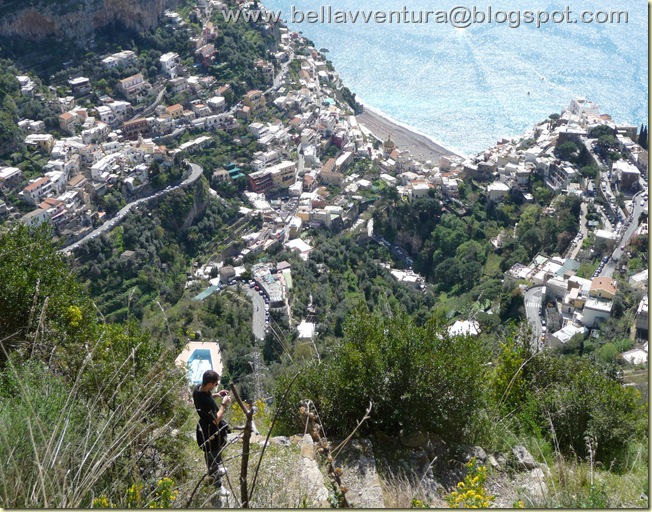 My husband’s childhood stories of  breaking into song with his uncles and aunt in the regular hiking excursions to this village as part of their Sunday entertainment, became less credible  as I stumbled on the loose stones under the hot sun.
How could someone sing and climb on a path so steep?  Would the vino have helped?
None-the–less, we kept up a steady pace and my family managed to chatter in allegria while plodding along. Every breathtaking turn was an opportunity to stop and take another photo of the cliffs falling all the way down to the sea.
‘Guarda che vista!’,  (look at those views!) became the leitmotiv of the walk.

Halfway there I couldn’t believe how high we’d come, nor how far we still had to go. But there was no turning back. My greatest concern was that returning down the roughly hewn steps would be even more difficult than going up.

Are we there already? Where is this place? 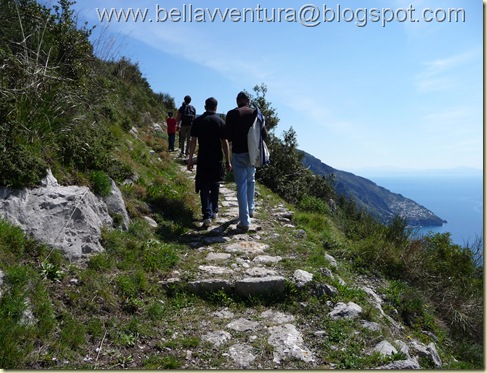 My husband recounted that his primary school teacher in Positano came from Santa Maria del Castello on the mountain but somehow I imagine that she would have found herself a room in Positano for the week rather than do this trail every day. It’s true that crossing over the mountains by foot or mule was once common place in these parts but going up and down daily, rain or shine, while not impossible, would have been draining. 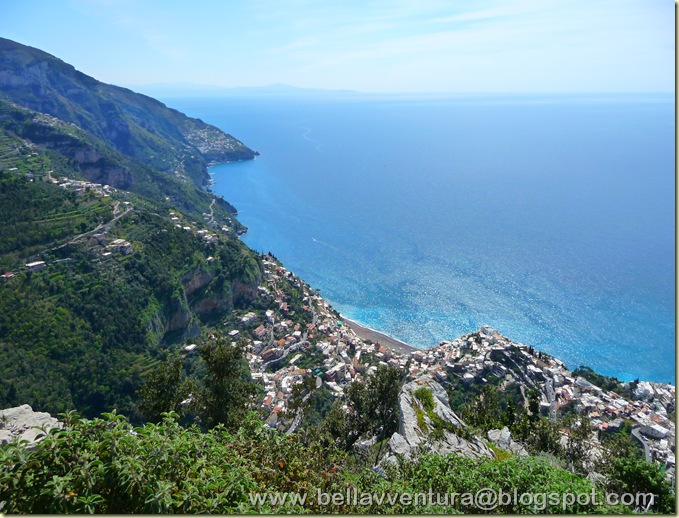 Punta Amalfitana
After an hour and a quarter of climbing, we finally rounded a bend,and came across the first houses in the village. A burst of cheering from a nearby field alerted us to a boys football match supervised by a priest and blocking our way were  Carabinieri (police) who had stopped a nervous young driver and were examining  his documents. It was a real country scene with burgeoning fertile vegetable gardens, flowering almonds and barking dogs but with the mod cons of cars going up and down a narrow two-way country lane just wide enough for one car at a time. As there was only one way to go, we turned right and followed the cars to the best trattoria and main attraction in town – Zi’ Pepe. 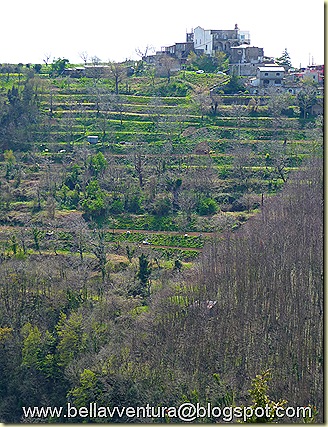 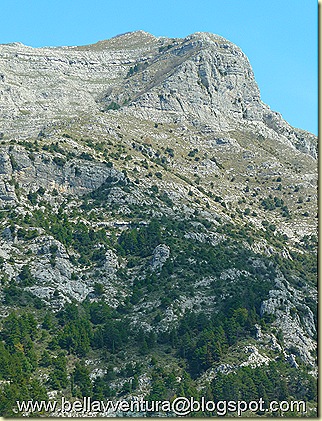 Naturally, Zi’ Pepe which had always been a rustic trattoria in Santa Maria Dell’ Castello had with the years, been refurbished into a large room but the food had remained as genuine as it had ever been. This is not the tourist style restaurant that you’ll find in Positano. I didn’t hear one word of English spoken the whole time that we were there. Even Italian was the second language as Neapolitan dialect flowed more freely than the wine. This is a real restaurant for Italians and they are not anxious to share it either.
We ordered antipasti for my two eldest sons (we are a family of six) from the Richard Gere lookalike waiter and he brought a abundant spread of fried tidbits (eggplant and potatoes croquettes, tiny arancini, fried stuffed olives) homemade salami, three types of prosciutto, fresh mozzarellas ( the mozzarella man was still there, talking to local diners), fried zucchini, roasted peppers, marinated anchovies, calamari salads… it seemed to be never ending. It was all too much even between the six of us, so our dog under the table got the treats we couldn’t eat.
It was difficult choosing first and second courses  not so much for the variety but for the guaranteed quality of the food at very modest prices of not more than 5 Euros a dish. Pasta con sugo di cinghiale (sauce made from wild boar) or porcini mushrooms was our pick followed by a parmigiana di carciofi because the artichokes were in season. It was all washed down with a good vino rosso di casa  (house red) at 3 Euros a bottle.  When Richard Gere offered coffee and Limoncello, I wisely declined thinking of the epic journey back to Positano ahead of us. Any more spirit and I’d be staggering back or sleeping it off.
Surprisingly, or rather, unsurprisingly, the restaurant was full of nattily dressed locals from Positano. Most had arrived by car but some friends had hiked up just before us  and were returning via Montepertuso. Our friend stopped to pick up his walking stick he’d left propped outside the trattoria, and we joined them rather than take the same trail down. 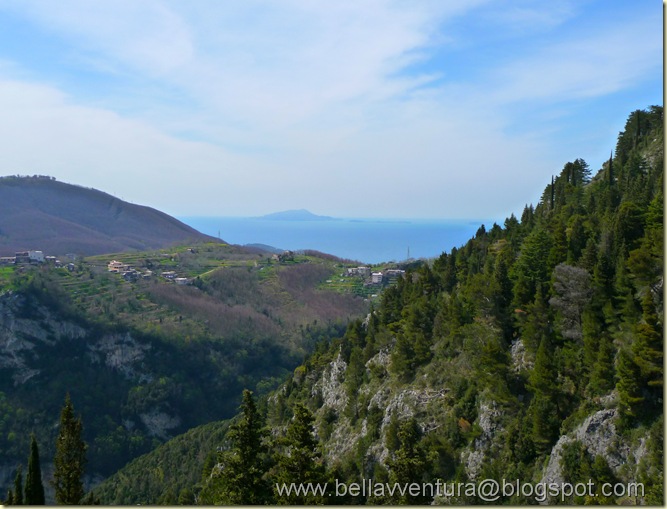 The Islands of Ischia and Procida
Our friends led us on a scenic path which dipped steeply into the valley at the throat of Positano only to rise sharply again on the other side of the mountain. Perched at the top before descending towards Montepertuso we were treated to a view of Ischia and Procida across the top of the mountain into the Gulf of Naples. This was a beautifully shaded walk in cool pine forests and under pencil slim cypress trees. Our tiny dog ran ahead trying to anticipate the path’s direction poking and prodding in every hole he came across.

View Full Album
We rose so high at one point that I was sure that he’d taken the wrong turn somewhere. But the path started zigzagging all of a sudden, down, down, down through people’s picnic points, hunter-gathers of wild asparagus and bonfires grilling sausages for a belated Pasquetta (Easter) picnic. It wasn’t an easy path to come down through on account of the high steps full of loose stones. A twisted ankle would be a probable scenario and I had time to ruminate on how the hell I’d get down in the event of a misplaced foot. I also made a mental note to bring my hiking boots to Positano rather than just wear trainers. 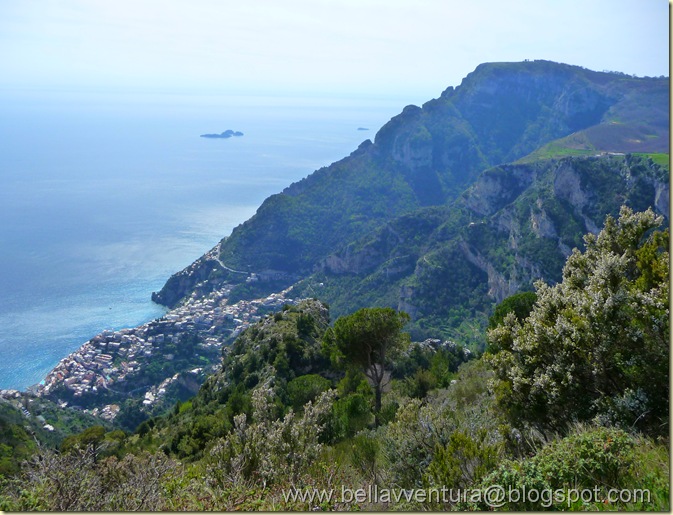 The valley of Positano far below. 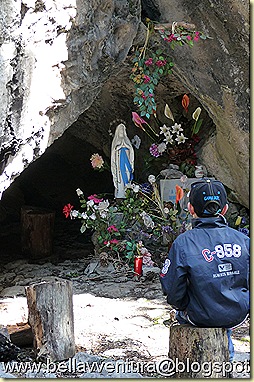 But we did make it down safely to Montepertuso Village roadside in Positano, level with the stairs that end at  La Selvatella bus stop. Already we had plans to come back next year at Easter because of the incredible feeling that teetering on the brink of that mountain had given us. We’d do it in the opposite direction next time and naturally stop by to be served by Richard Gere at Zi’ Pepes’ for our pit stop.

I would truly love to do that hike it looks absolutely awesome, those views! The path looks fairly treacherous looking at your photo I bet that got the adrenalin racing. Thankyou for a wonderful description of your family outing, I felt I was there with you.

I would absolutely love to take this hike - it all sounds so fabulous! Love your photos and stories, keep them coming! xxoo :)

I would love to!!! But alas, I'm so afraid of heights, just the story alone made me anxious. But those views they are magnificent!

Wow Scintilla Absolutely stunning , but what a hike. You and your family had a fabulous day out, I would do it .. little afraid of heights though, oh what the heck , just to have lunch like that with Richard Gere lookalike..

The wild boar sauce with pasta is delicious, had that on my last trip to Italy.. It all sounds tasty.

Thank you for sharing this great day, your photos are FAB!!

We love doing that hike. Hey, when you live here, that's mostly all there is to do in the winter: hike the mountains. We usually use the second trail though.
Last fall we hiked even higher, Monte Molare. Amazing views of the two gulfs from that height.
I would recommend to try another trattoria though: La Sorgente del Melo, we LOVE it, he's from S.M. del Castello while his wife is from Positano and cooks AMAZINGLY!
Dollyna

heartstoppingly beautiful, of course, but also kind of scary. I still can't believe we walked with Nicki up on that mountain... but then again, the views are so gorgeous that they take your mind off the risk of falling.

You are one brave woman ! heights scare the weebie-jeeboes out of me.Great recounting, food sounded so wonderful, thanks for sharing ! Gina

I miss Positano...You got some really great pictures.

I've walked from Nocelle to Montepertuso and thought that was taxing. heh

I didn't know there was a village even higher up on the mountain.

I'd be so afraid but that view would be worth every step! Paradise on earth! Thank you for sharing something I most probably will never experience!

Loved this post, Scintilla. The photos, the description of an excellent lunch... Packed water for your dog... you're my kind of people.

wonderful! I hope to take this walk soon... July maybe.

wow, that looks like a fantastic hike! And your photos... bravo. Gorgeous.