I wake to an unearthly yellow light and the throb of a chopper overhead. Sunlight is lost to a haze in the air, and an acrid smell of smoke clings to the washing hung out overnight. Ashes scatter as I throw open the terrace doors and a Canadair plane swoops low over our house to the water where it scoops from the sea with it’s gigantic belly. A second one thunders past at an angle, fast on the tail of the first one. It is so close that I can see the pilot. The sound similar to air raids in a war-torn country is deafening and continues all day, unremittingly  until dusk.

Today is the third day of a devastating mountain fire over the mountains of Positano. A fire which has destroyed the best part of the mountain’s pine forest and a loved walk of the Positanesi.

The fire started two nights ago in the hills above Chiesa Nuova, just before dusk, as always. The first flames were visible from our home. 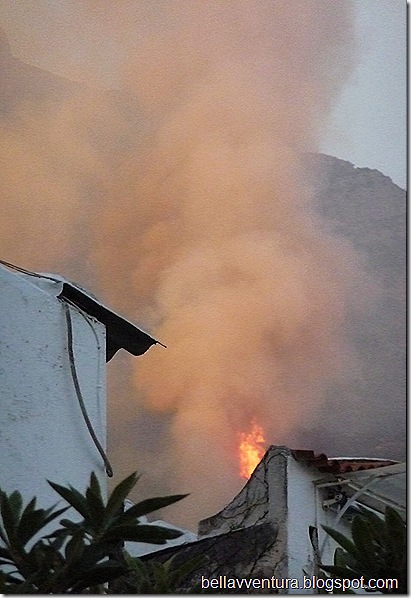 Helicopters were on the scene straight away dipping at Fornillo but had to stop in the dark. 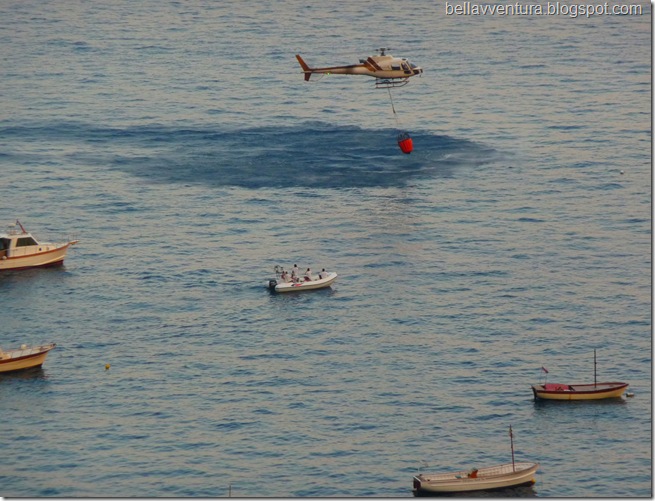 Volunteers worked all night against the fire which fanned in the timber dry area until it had spread in an ever widening circle to include Montepertuso and the Monte Faito mountain in the Gulf of Sorrento.

When we set out in the morning in our boat the mountains looked like this, with pockets of fire scattered wide. 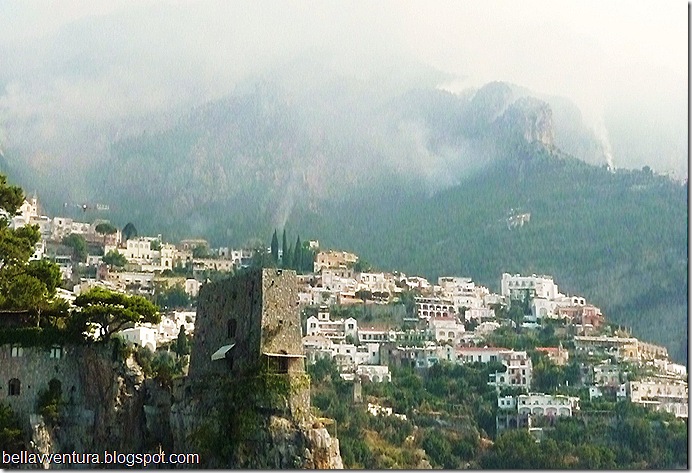 On our return in the afternoon, I was there in time to witness the helicopter’s release of a  bucket of water over the forest beneath the mountain hole at Montepertuso. The scene was nightmarish. Blackened mountain as far as I could see.

If only tears could drench the flames.

If need be, just leave. Positano will always be there. Stay safe. Un abbraccione

Oh Rosa, how dreadful. It's such a terrifying and destructive thing, bushfire. Stay safe and let's hope this horrible summer wont be repeated.

It has been a sad summer for forest fires all over Italy and indeed many years since I have seen such devastation on the Amalfi coastline.Stay safe.

I am sorry to see this. I am heading to Positano in September and would love recommendations for a place to stay for 4 nights in town.

Ooh I am really sorry for the fire, hope everything is better now!

That is horrible! I know I'm so late getting to see this...
the forest ... so sad. Were everyone's home's ok? And the church? Fires are scary. We get some crazy ones here in California and one was so close to my parents' house the firemen moved their patio furniture and used their yard and backyard to stage their firefighting. Terrifying and then all the park next to them was black after that. Hope green comes in soon and new growth.

That must have been so frightening. How very sad to see those trees going up in flames. This summer was interolarably hot even up here. And it came so quickly after a terrible winter. Seems there are no more seasons. From freezing cold to boiling hot at the flick of a switch.

I do not even know how I ended up here, but I thought this post was great. I do not know who you are but definitely you are going to a famous blogger if you are not already ;) Cheers!