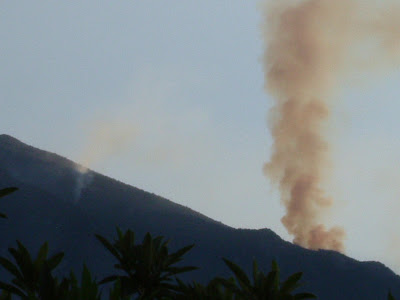 My last night in Positano was interrupted by fireworks (again) at midnight as part of 'La Notte Bianca' celebrations. They were being held at La Marinello at Fornillo beach so we had a bird's eye view of them. A light in the mountain caught the corner of my eye and I lifted my head to see flames rise high above the village of MontePertuso. There were three fires burning in the same area, the orange flames licking the dark and creating a riveting scene much more interesting than the 'done to death' firework displays.
Apparently the fires had been lit in the beginning of the beautiful mountain walk called "Il sentiero dei Dei" -The Path of the Gods. This pathway is no where near the roadside so it was not accidently lit.
The morning showed flames even higher in the mountain and the helicopters were out by 7.30 swooping down to dip their buckets into the sea, then sweeping up over the house spraying droplets of water behind them.
"Drop us some fish" my son yelled.
I counted four helicopters at one stage - two were touristic and two for the fire. You can imagine the noise.
I had to leave Positano on Sunday in the early afternoon to catch my plane back to Luxembourg and the helicopters were still at it. According to my husband, they continued all day yesterday too.
We are now back in the autumal grey climate after two months of endless sunshine and blue skies. At this rate, my golden tan will soon end up on my towel.
Hold that thought.
by Rosa

Email ThisBlogThis!Share to TwitterShare to FacebookShare to Pinterest
Labels: Fires, Path of the Gods

Could these ones have been started by fireworks landing on dry ground?

Sally - Fireworks are usually held at sea level to avoid fires. Montepertuso has them in town in the mountain but there were none there that night.

This is sad if deliberately lit.
Welcome back to posting. You have been missed!