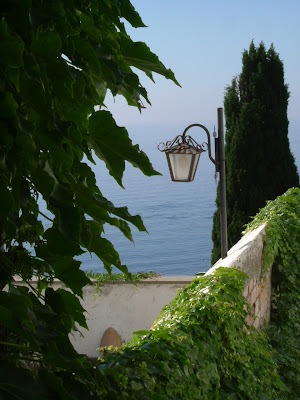 When you live in a small village with international fame, you don't necessarily get to know your neighbours. You may overhear snippets of conversations or pick out a foreign accent from over the wall, but you may be just as likely to learn more about them from a third party. I heard something from a third party which really saddened me.
About five years ago, one of the properties was sold, with which we share a neighbouring wall. A construction company mysteriously appeared and the flat was gutted and completely redone. A pretty bench inlaid with tiles, a wood-fired pizza oven and BBQ adorned the patio. New floor to ceiling windows replaced the old ones in order to drink in the view and dichondra grass was planted between pavers for the finishing touch. The ancient bignonia creeper planted in the corner over fifty years ago, was pruned, but left to act as a pergola shade for both the two flats above the house.
The painters were in, the carpenters and tilers, then nothing for five years.
No one came. A local family had the keys to the house but were not caretakers, so the place became overrun.
In Sleeping Beauty style the climber grew and grew until it completely covered all the facade, windows and doors included. I don't know what the musty interior was like but mould and mildew must have been equally as rampant. Season after season, leaves and dirt piled high in the patio and the paint began to peel off the walls.
Until late last summer.
After years of silence, one day, my other half said that he had heard voices next door who seemed to be speaking in English. From the other side of the wall I discerned what seemed to be a young man with a New York accent and another woman speaking English with a foreign accent. They were very obviously sweeping out the patio of the rustling dried leaves.
'That's good', I thought, ' someone is finally taking charge of the place.'
Last week my other half was in Positano again. There was activity in the property once more and the painters were in. Asking about the owner, they informed my husband that the flat belonged to an American model who had the place refurbished. She then died without ever having used it.
Her parents going through her files came across the deed to the place which she had never mentioned owning. They had they discovered it only recently, five years on.
Shattered dreams. Isn't that sad ?
by Rosa

That is sad. At least the family can take over the house and maybe it will be a nice memory for them.

So sad, I agree with Leanne, but sad that the lady didn't get to use it!

tragic. I wonder who the model was.

Gosh - that is sad. You've got me wondering about her too. Who she was, what her hopes were for the house... Shattered dreams, indeed.

Can't also help thinking where the town hall were sending the bills for rates, etc.

WOW, what a tragic story about the place next door! It makes for a fascinating story, sadly enough. Hopefully it will become a lovely haven for the family.

That's a brilliant post. Intriguing and still mysterious. Thank you.

Oh what a sad story! Wonder what kind of life she would have had if she had moved in there. That's the thing about life though right, you can't predict it.

Lovely writing as usual. You transported me to the secret garden, pushing back the vines to enter the musty but beautiful rooms. It is a terribly sad story that leaves one wanting to know so much more.

wow that is sad

Sounds like the beginning of a great novel! In reality it's really very sad, I wonder why nobody in her family knew about it? Intriguing.
Thanks for the kind words on our blog, it's always lovely to get your comments. Have a good weekend. amanda

Oh, that is sad... and also moving to think of the vine reclaiming that forgotten property.

I agree with Amanda, it would make an intriguing novel/movie opener because it raises so many questions, like why had she never mentioned owning this place? Was she in need of a retreat? Let us know if you learn anything more.

Imagine finding out that someone you lost had a home that you weren't aware of.

wow... sad but a very interesting story. I wonder how many situations just like that that people never find out about.

Hey have you met Louisa over at Carmine Superior? Check her out; she's also an expat (US) living in Italy...lovely blog...

What a story. I'm with a Tusxan View...sounds like the beginning to a good novel.

wow. very, sad. I wonder why nobody (friends/family) knew about the house.

Of course I wonder who the model was too.

I agree with Amanda...it could be the opening of a novel.

What a terribly sad story...