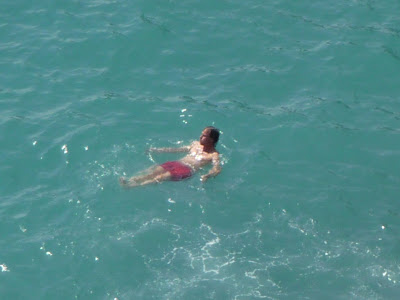 If Mother Nature was really a woman, she'd probably be put on hormonal replacement therapy.

This spring has seen a fluctuation of temperatures and mood swings in the daily weather worthy of any pre-menopausal woman with PMS. The locals, dependent on the sun for the start of the season, look to the skies and pray before putting out their boats and sun loungers. Work has started spasmodically, as morning sun plays games with the clouds bringing downpours in the afternoon. The sea is often in turmoil or libeccio winds blow strongly tinging the water a deep blue. 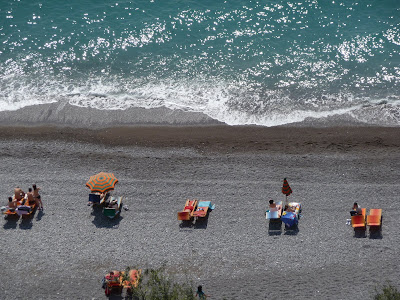 Tourists poured into the town this weekend in a deluge, because of the May 1st holiday. On Saturday the ferries emptied nonstop crowds on the dock and a river of bodies lined the shores of the main beach. It wasn't the warm weather that we'd had before Easter, but the extra bank holiday was enough to shake the winter lethargy and commuters from neighbouring cities mingled with foreign tourists to create bedlam on the structures of the town.
The irony being that they all went in May to avoid the summer crowds. According to the papers, almost 10,000 people milled in the streets and beaches. No thank you. 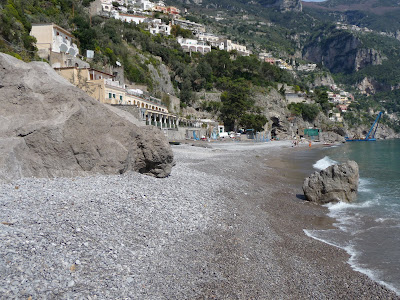 Fornillo beach is always quieter. Its the local's beach and this year Mother Nature has been generous, giving the public an ample strip on which to lay their towels. As well as the direction of the tides, the sand that has been dropped in front of the shore has helped and I was happy to see that the barge was at work again picking sand up from the main dock to transfer it Fornillo's way. It had been a very long time that I'd not seen the public area on the Fornillo beach so large. 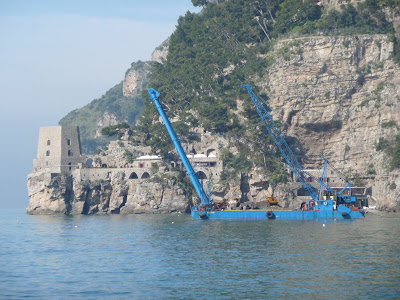 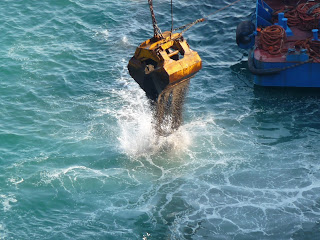 The construction of the beach bars were well under way before Easter, but the work that the Council is doing behind the beach has been suspended again. Hopefully, it will get underway before the summer season begins. 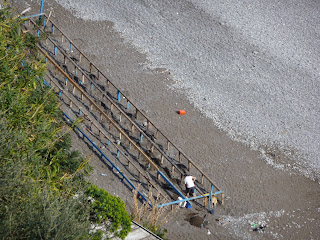 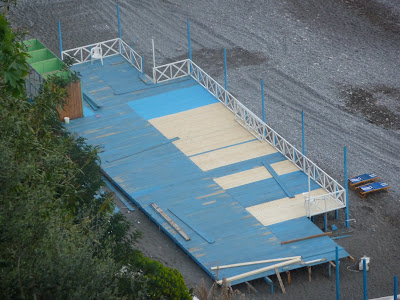 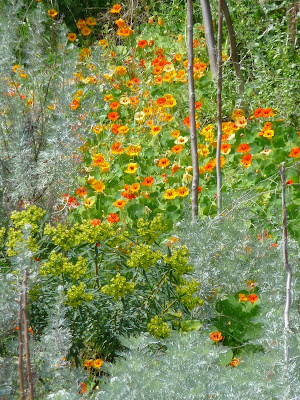 And perhaps optimistically, they'll even pristine the long stairs which lead to the beach with their long cascades of nasturtiums, euphorbia and what I think is Artemisia or wormwood.
In this case, Mother Nature has certainly done her best. 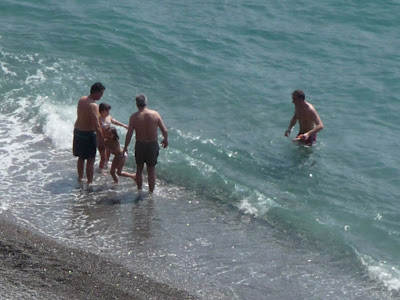 It must have been packed.

That water looks nice,I guess the tourist think so to!

beautiful photos as always...and i just love your first sentence :)

Amazing. Your pics make me feel as though I am there. I've never seen such beautiful water! I would feel nervous, though, about 10,000 people landing in such beauty!

Great photos ..love the one of the flowers :-)

Were you here again? It was CHAOS. Today I was up at La Garitta and admiring your lovely home.
dollyna

Your opening remark made me chuckle. How true.

How about escaping to Lurito on the really bad days? I miss it there, it's been too long since my last visit...
Ciao!

So much beauty there, it's breathtaking!

I can believe 10,000 tourists! There must have been at least that many in Amalfi. I haven't seen anything like it since the Regatta day last summer. It was wild! I don't get over to Positano to swim as much as I would like, but Fornillo beach is definitely on my list this summer! I agree about mother nature this Spring! :-)

I need to get back to Positano , but I do dislike all those crowds. Send me your email address and I'll gladly respond to your request.

Mother Nature on HRT - what a fantastic line. The weather was crazy here too, but has settled now.