The Path of the Gods or How to be Thankful for Roads again.

There came a time where I wondered what the path to heaven actually looked like, so a friend from Positano (an angel in disguise ?) offered to guide me in the mountains above the Coastline. 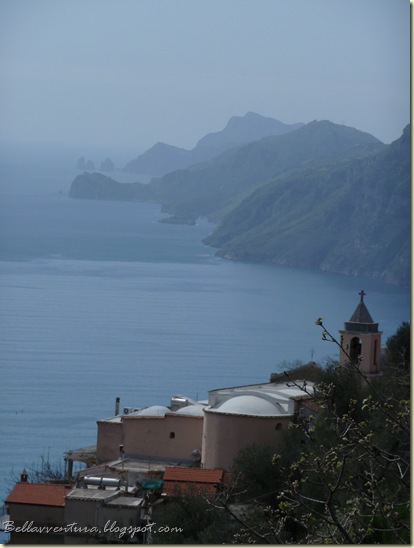 We rose above the tiny village of Nocelle (by bus) and took the stairs leading up from the houses where the Path of the Gods began. The track was originally that used by villagers to go to Agerola before the road along the coast was built. The path and gardens of Nocelle were full of blue borage flowers, the air perfumed with rosemary growing in the cracks of the rocks. I quickly realized that not all rosemary plants festooning the cliff faces had same intensity of perfume, so I broke off some of the choice pieces to dry and use in roasts. 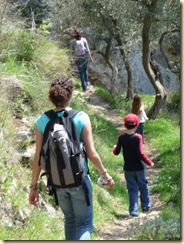 My eight year old had tagged along to keep her little one company and the kids were off as soon as we hit the path. L. skipped and bounded confidently off the roughly cut rocks with mine following somewhat gingerly behind. You could tell who was from Positano and who was not.
It was late April but the sun was shining and warm and as we followed the narrow dirt track in and out of the mountain curves we became grateful for the cool respite in the glades full of wild cyclamens. 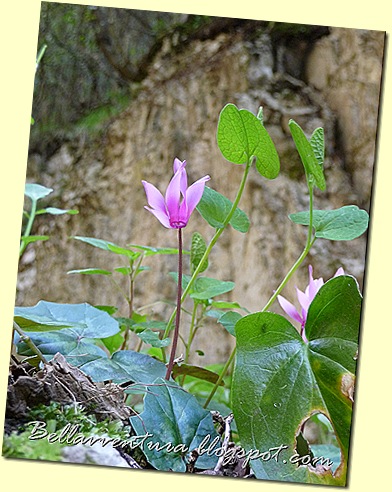 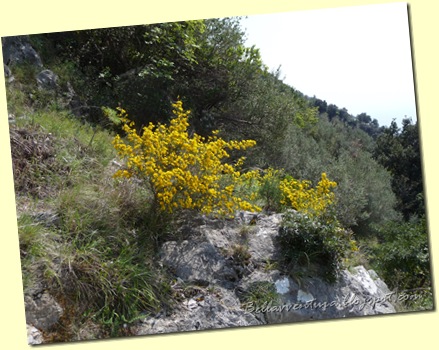 The whole mountain was a mass of flowers. Bushes filled with dainty spring blossoms lined the paths. I spotted wild lavender , broom, chamomile, citronella, and squeezed mirto leaves between my fingers. We even came across a grassy ledge with wild orchids hiding amongst the leaves. 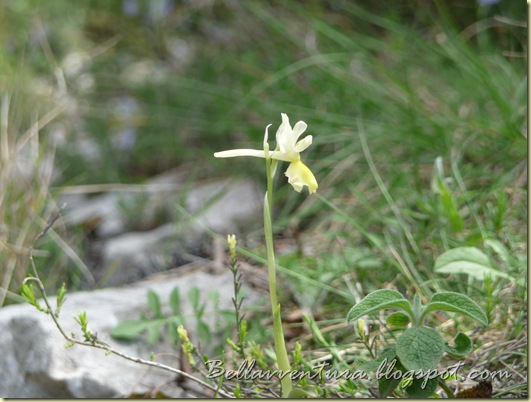 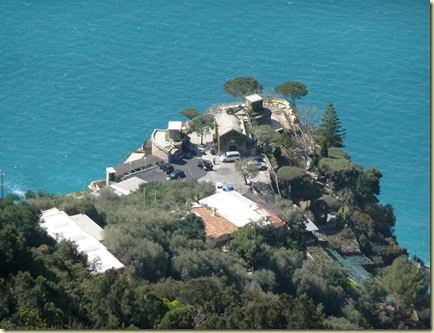 Walk as we might, we always looked like we were on top of San Pietro Hotel. The path followed every curve in the mountain sometimes perilously close to the edges of cliffs. 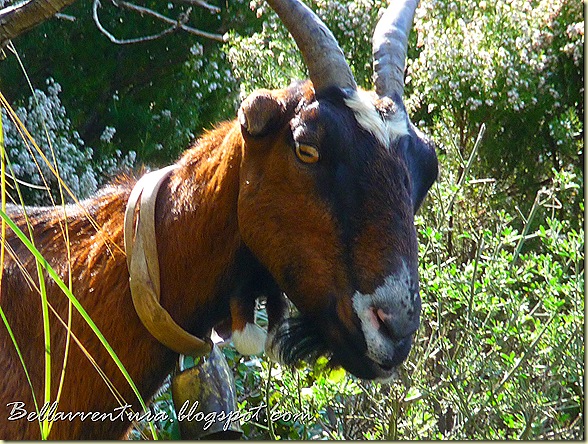 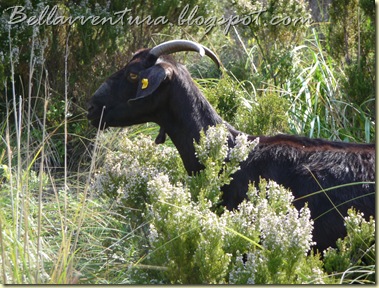 A gaggle of goats stopped to watch us. We smelt and heard the clanging of their bells before we actually came across them, their red coats shining a henna rinse. Snakes slithered for cover and a scorpion lay slain by a previous hiker. That is the only scorpion I ever intend to see. 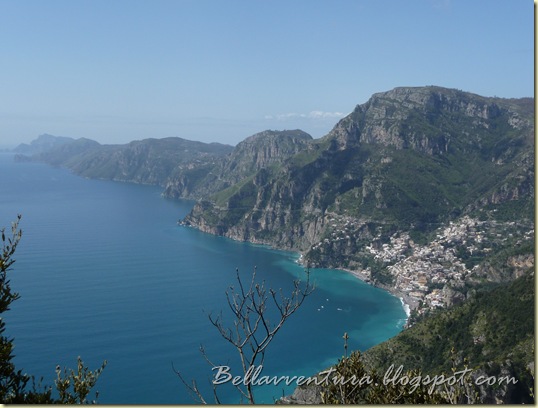 The kids had a break for a panino and then came the hard part. My friend had every intention of visiting a small monastery fallen into disuse called San Domenico tucked away in the folds of the mountain near Praiano. When she pointed it out, I thought it an improbable option as no path actually led there (or so I hoped). But she determinedly scouted ahead to see if the track continued down the cliff. We slipped and scrambled our way down steep stony goat-dropping infested paths, mostly on our bottoms, so as not to fall. Just as the path seemed to want to catapult us over its edge, it would twist suddenly and cross to the other side. 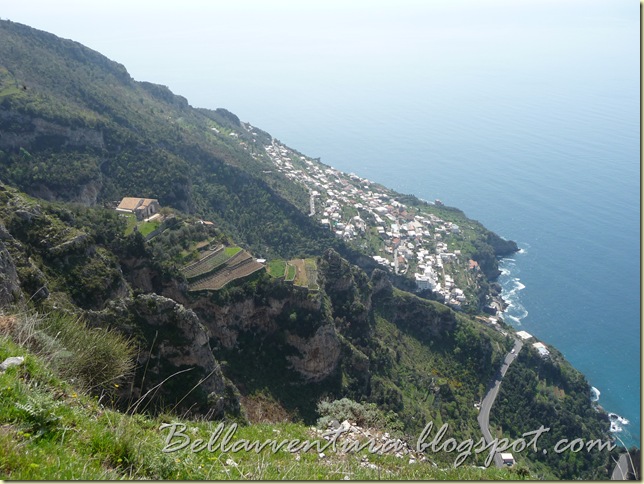 But the peril was well worth the visit. Frescoes graced the arches of the church with a simplicity which was refreshing. 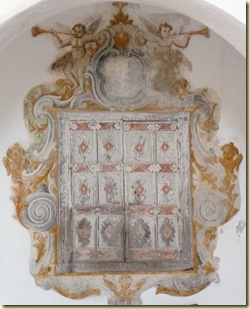 A bell was positioned over the town of Praiano. 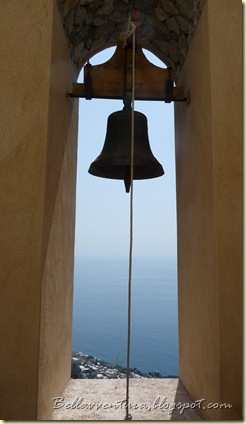 From then on the going was easy. A long stairwell brought us all the way down the mountain from the monastery to the village of Praiano. Halfway down some very steep stairs, a cardiologist had chosen a corner for his studio. Maybe it was for those who were on their way to the pathway to heaven.
For more info on the Path of the Gods, here is a good site.
Ciao Chow Linda’s has to take all credit for letting me know how to adjust photos for the blog. Take a visit and see her blog for yourself. Thank you Linda !


The photos from this post were the winners in Blogging from the Boot.
by Rosa

Beautiful and breathtaking, thank you and your friend (can I guess who?) for the amazing hike!

Very nice. I will remember this when I go to Praiano in September. thanks

Thanks for the shout-out. I'm glad you figured out how to resize the photos - they look gorgeous. Wish I could have been on that hike with you. What a dream of a place. Loved the goats too.

I could almost cry the view is so beautiful! I love the large photo's.
Now that's what I call a hike!

Thank yo for taking us on this hike! I so, so, needed this tonight. The picture of the goat gave me a giggle! What an amazing place to be...

Ciao Scintilla! The pictures look lovely!! I love the angle ones... that is a trick you will have to pass on to me from Ciao Chow Linda. :-) For all my hiking in the Amalfi area, I have yet to walk the Pathway of the Gods. I really want to!! I would love to tag along with you if you feel like taking that walk again this summer. (Once you've had some time to forget all those steps....) Thanks for sharing the beautiful photos and stories!

Spectacular ! You had just taken me on a beautiful hike! The array of photos just pull you in. I have a chance in the future to visit a home in Praiano, Can't what!!
Grazie :)

Spectacular! Thanks for sharing.

Snakes????? No thank you. That's why I never did that hike. But thanks for the lovely pics.
Dollyna

Absolutely beautiful. It makes me sad when I think about how I won't be in Positano this summer.

Absolutely breathtaking sceneries. Thank you so much for showing me this Path of the God" Amin! I'll bookmarking this post, who knows I'll be able to visit one day.
Cheers,
elra

that was a great adventure.
I think that my favourite time in Italy was the week I spent on the Cinque Terra walking along the hill and cliff faces to each of the towns, reminiscent of your pictures, stopping for simple local nourishment and taking in the stunning views.
Thanks for reminding me and taking us today on the pathway to heaven.

What a beautiful hike and great photos! Thanks for sharing.
I've visited you from Poppy Fields. Glad I came over!

Don't know what to comment on here, Scintilla. Everything is beautiful - the wild flowers, the wildlife, the views... Glad you made it to the monastery. (I think my faves are the photos of the cyclamen and the church bell.)

Lovely. I absolutely love the photo of the bell. It is stunning.

Dear Bella,
It's nice to walk in Heaven! Such a beautiful place to be!

Great photos & lovely blog. How did you get the photos to look like that (like postcards that is!)?

wow. WOW> Drop dead gorgeous. A gaggle of goats and wild orchids! Thanks for letting me tag along. I saved some rosemary for a roast also. So lovely.

What a gorgeous hike (and the images do the storytelling justice). With the temps that we've been having lately (today 30°C!), I don't see ourselves hitting the trails in the future. Summer didn't waste anytime getting here this year!

Wow, beautiful! And I was just going to ask how you did that with the photos, now I'm off to see...

wow!!!! your shots are better than most postcards!

Congratulations on your win in the Blogging from the Boot contest for this wonderful post! I must take this walk this summer. Are you game to go again? :-)

your photos are delicious!