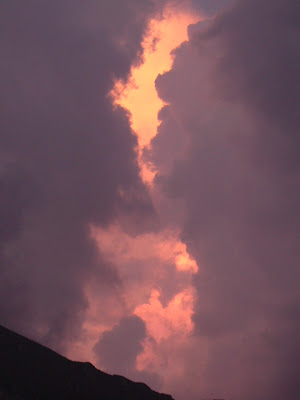 The rain finally arrived in Positano over the weekend. After two and a half months of sunshine , it wasn't the after-summer deluge we expected. It was enough to water the very dry garden, but even though it had been a waterless summer, it hadn't felt like one of its hottest, with the exception of only a few days. The thunder in the morning flickered the lights several times and the sky clouded over with ominous clouds but it brought just an average long shower.

I have been through quite a few of these late summer storms and the most severe of them have a pattern:

It know its raining in Positano if:

The craggy mountain behind you goes into shadow and a black foreboding mass of clouds gathers on it's edge;
The bagnini on the private beach sections start collecting the two front rows of chairs and beach umbrellas just in case the sea becomes rough;
Owners of lighter sea vessels pull their craft on to the shore rather than risk losing it at sea;
The rain comes as a sudden heavy curtain blanketing vision across the sea;
You run around the house closing all windows against the temperaments;
You become glued at the window looking at the downpour and mesmerized by the din as it pelts down on the vaulted roof;
It becomes hot inside and the windows fog up;
The bath starts gurgling; the sink in the kitchen starts gurgling as the drains fill up with rain water;
You hear heavy gushing outside. You open the front door and see a waterfall running down the steps. You husband strips down to the waist and climbs barefoot up the waterfall in order to clear the debris from the drains in the alley. Niagara falls trickles to a rapid river. While he is wet, he thinks that he may as well check all the drains around the house and walks through the house to the other side dripping every where.

The windows start leaking from the tell tale moldy signs around the arches where the plaster and silicone has given way. You put rags there to catch the drips and others to catch the water coming in from underneath the doors, and skylight on the stairs which has also sprouted a leak.

The downpour lasts a long time. The kids have nothing to do as the TV antennae has been disconnected as a precautionary measure against lightening (known to strike in the area especially at Monte Pertuso in the hills).
All the tourists have taken refuge in the bars, shops awnings and restaurants and have to wait it out. There is nothing else for them to do. The stairs are nonnegotiable unless you roll up your trousers, take off your shoes ( or happen to have a pair of rubber boots in your summer wardrobe).
You have to use a small umbrella and hold it sideways in order to get through some of the narrow alleyways,

If the rain persists at falling at an alarming rate there may be rock falls or land slides and the state Amalfi road will be closed.
If you live in one of the houses based at the lower part of town towards the end of the sewer pipes, you may find (as we do) that the pipes are unable to cope with the rain water being channeled into the sewers illegally and that this said water begins to rise up and come out of the drain in the showers and over the edge of the toilet to flood the bathroom and any room beside it. You only discover this the next morning (unless you have unfortunate guests staying ), when you go down to hang out the wet rags used for mopping the leaks in the house and step into a room full of dirty water and debris.

By late afternoon, the sun will be shining. If you are lucky you will see the rainbow that falls into the sea.
You will be out in your shorts again avoiding those cobbled puddles on the stairs and making your way down to the beach so that your son can ride the waves to his fill on his boogie board.

Email ThisBlogThis!Share to TwitterShare to FacebookShare to Pinterest
Labels: House, You know you're in Positano if...

Nice to see you back! Here in Sicily we had our first rain shower that lasted most of Saturday and Sunday. Today, however, the sun was shining away!

I hope this finds you well!

Yes the rain was a big relief, but boy the temperature has really dropped the past few days.I hope it warms up again soon as I'm not quite ready for winter yet!

jilli- you were probably refreshed after your trip anyway!

shirley- it is a bit sad because its a sign that summers coming to an end...

We had rain too. For two days! The sun is back now, but it's significantly colder and the duvet is back out for the winter.

I suppose it'll be roasts and pasta bakes instead of salads - so not all doom and gloom.

I love that I'm really starting to get a feel for the weather around here and getting good at guessing when it will and will not rain; almost makes me feel like a local. Almost ;)

Two wonderful days of rain here and even after a year I can't get over the warm glow of satisfaction when I see it teeming down outside and our new roof protects us from the old flooding of the living room.

You sound very patient about the water backing up - but then that beautiful view must have a wonderful calming effect.