You may find this post dull, but this is a problem in our house at Positano which I have at heart, because in the twenty years that I have been there, it is still not resolved and gets worse.

I read with interest the report on Positano News regarding the sewerage build up due to clogged drains in the Grotta Di Fornillo area and the subsequent flooding of the street after the first seasonal rains. The brief article also hinted at the inconveniences experienced by locals along the stairs due to the lack of channeling for storm water. I had recently touched this problem in my post here, and think that this is a good time to show you what reality is at our place with photos. I apologize for the quality, I scanned a scanned photo.
The public drain pipe along our house in Fornillo, was laid in 1973 under the steeply descending stairs, when only a few original houses and villas in the neighbourhood were attached. Since then houses have sprouted all along the cliff side and more importantly Hotels in the area have been built and have branched on to this same pipe, creating an important flux of waste water especially in the summer months. The drain pipes, already stretched to maximum capacity in summer, clog regularly and during rainfalls, regurgitate the overflow into any escape route nearby - namely out of our shower plug hole and out of our toilet bowl.

During heavy rain, we don't just mop up rain water which has leaked in under windows and doors but also need to clean up the filthy water around the bathroom floor. Sometimes this overflow has been so important that the water has gone past the bathroom and into the bedroom. Our solution has been to place a barrier on the floor against the door to prevent water leaving the bathroom , and to drill a hole in the base of the bathroom wall with a tube channeling dirty water directly into the garden.

This is a bathroom which has been long overdue for renovation but given the important damages it suffers from the inadequate sewerage pipes, we have had to postpone work until the Town Authorities find a solution and decide to do something. 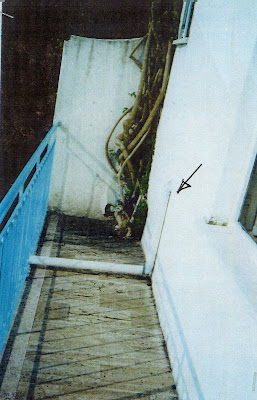 Tube runs from bathroom to terrace.

The drain pipe that runs down along the stairs at the side of our house turns sharply in an L bend at its base. The extreme descent and the force of the water cracks the pipe regularly each year. The odour of sewerage at certain times of the day is so strong that we have to close all windows and doors to avoid the stagnant smell. Sewerage leaks out from under the stairs creating luxuriant foliage in the weedy gardens below, which in turn, masks a swamp of mosquito- infested lurid water.

Soil subsidence is evident in two areas along the leaking sewerage tube causing important structural lesions in terrace and causing the steps coming down from the garden into lower area, to break away from the wall.
We go to see the Mayor about the problem every time we are in Positano. Sometimes he sends his engineer, sometimes he tells us there are no funds for repairs. Sometimes he sends repairmen and they cannot find the important cracks, so they place a tube to displace water from the leak into the gardens of those below us. They create a sewerage leak overflow, the continuous trickle of which sounds to the unwary like a garden fountain. 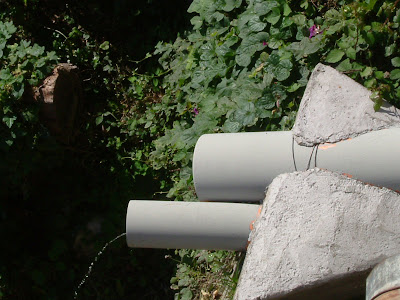 This year we had a sewerage fountain and a swamp, so the Town hall, at our insistence, finally sent someone to repair the tube. They were at our place in summer on and off for two weeks and did some major reparation to the pipes reducing the leakage fountain to a drip. The problem with the overflowing rain water in the bathrom has not yet been resolved by the Council.
Many years ago, the Town Mayor came in person to our house to see the problem with his engineer. They visited the garden below to get a better view and as they came up, I told him about the increase in rodents around the area due to the sewerage leaks.
He said (in Italian): ' While we were down there, we saw a rat as big as a cat!'
Then I remarked, that when we have a sewerage problem in Luxembourg, we make one call and the Council sends out repairmen straight away.
'Si', 'Ma qua e`venuto il Sindaco in persona ! ' , he replied.
(Yes, but here, the Mayor came in person ! )
Would you put up with this?
by Rosa

So typical, so Italian...sigh... Well, BFD if they sent the mayor, Mr. Mayor! What are you going to do to fix Scintilla's problem?

I do hope you don't have to wait another 20 years for resolution!

I fully undrstand = as a Brit I would not put up with it but being married to an Italian and having a house in Sicily we put up with many things! Yes water supply twice a week. Fortunately we have installed enough tanks, together with a motor to speed up the supply but even so if they cut back the supply we are obliged to call a 'water supplier' who will deliver. Apart from these hiccups I adore it and hope we will retire there.

Wow, I didn't realize how darn serious the problem is down there, I don't live too far but thank God don't have that problem...
dollyna

I do love your spirit, the way you take Italy's funny little ways on the chin.

Much sympathy though for you having to cope with it.

No, actually I couldn't put up with it. But then, they say that in London (where I lived for many years) nobody is ever further than a yard away from a rat at any time!!! I never saw one, but that fact always stuck in my mind.

Saretta - just get no satisfaction from Italian figureheads!

Annon- I adore it there too! Lack of water is a serious problem. We had water tanks installed years ago as they used to turn off water systematically in the evening in summer too. Thank goodness that's over.

Dollyna- There are neighbours of ours that have the same thing happen and everyone can smell it!

Robyn- I love Italy but everyday hiccups can be sooo frustrating!

Casalba- Rats go where they feel at home. Didn't know that about London- yikes!