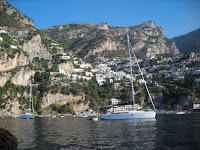 Although the sea in Positano is still warm enough for swimming, most of the bars along the beach are beginning to close shop in a reversal of their frenetic hammering of May. Plank by painted plank, the faded blue platforms, worn down by many bare feet crusted in black sand, are dismantled. The boards will be stacked for winter in the hotel, a fresh coat of azure blue applied in May to camouflage the scratches from the scraping of director's chairs, where beach clad bronzed bodies lounged over lunch or a late afternoon drink/gelato before attacking the stairs. There is still the odd sunbed left on the beach for tourists or weekenders, as summer has lingered this year, but November brings other tasks for the bar/garden owners of Positano.

Positano, seemingly a haphazard mishmash of gelato-coloured houses stacked one on top of another to follow the lay of the land, is just that.

The land or properties are not divided into square or rectangular shapes following your average domain, but are quite irregular in shape, with parcels of smallish gardens protruding from the house at different angles, or not necessarily joined to the house. This can create squabbles with neighbours, as they have right of way to harvest fruit from their garden, through yours.


Late October is the time for walnut gathering. For those of you whom are not familiar with fresh walnuts, the shell is encased in a thick green husk. When the fruit inside is mature, the husk cracks open, releasing the nut. This can occur spontaneously or if helped by a firm rap on the branch at the right time of the year.

The Fornillo area of Positano has a lot of mature walnut trees overlooking the bay, in many cases stretching out over the property of those below in order to get a better view (or at least catch the sun), so when the time comes for the battuta, or the hitting of the trees in order to fell the walnuts, the owners of the trees have to enter in the property of the neighbour below to collect their nuts.

This is the case in our smallest garden. This pocket-sized garden has a small locked gate so the neighbours above the garden let themselves down by climbing the grape vine pergola along the wall after they've beaten their tree. If they know we are home, they furtively gather the fallen nuts in a hurry. If not they take their time to search better between the plants.

Years ago, we had a magnificent mature walnut tree growing alongside our house in the property of our neighbour below. The tall tree cast shade on our terrace in the summer and it's boughs beckoned within an arm's reach, temptingly clustered with walnut husks.

Around this time of the year, the men working for the bar owner would arrive, mounting ladders from the terraced gardens below in order to climb the tree. The delegated lightweight would crawl along the branch as far as his weight would stretch and with long canes, whack the nuts grouped between the leaves. While he was there he'd also prune any dead branches and to my consternation, those good branches over-shadowing our terrace.

If I peeped over the edge to see what the commotion in the gardens below was about, the gatherers would trill out in Napolitano to the tree-hugging man, to hit some walnuts in the Signora's direction and I in turn would gather the nuts from our terraces. Those fresh sweet nuts peeled of their inner bitter skin were a delight. I didn't care how black my fingers would stain.

Unfortunately, this centenary tree, keeled literally over, a few years ago, probably due to the leaking sewerage at its feet. A baby tree has sprung a few metres from its mother's side. Maybe I'll see shade and nuts on our terrace yet.

In the meantime, I'm reduced to scavenging the fallen walnuts overlooked in our garden, from the other neighbour's tree.

I noticed how the houses were sort of built on top of one another and as you say in a mish mash way..when we were at Lake Como...it still amazes me when I look at the photos, how houses just appear, in the mountain sides :-)

Anne- Not much urban planning in these places !
I like using the word 'mish-mash'.

Ciao! Why don't you come back to Lucca??? We're waiting for you... Your blog is very nice! I'm jelous of your living in Positano! I love Naples and its area so much!
Have a nice day!
A presto!
Vale

I enjoy(ed) this time of year on the amalfi coast when everything winds down. It was a nice change from the chaos of summer.

Those walnuts are delicious, lm sure your neighbours will share:)

Hi,
This has basically nothing to do with anything, but . . .
I am a budding author with a recently finished manuscript. The story is kind of a road-trip affair, with side trips here and there. Yeah, well, to make a long story short, pun intended, one of my character’s father gets sent to Positano right after the war, separated from his newly found true love, who lives in bombed out Vienna. I have no idea how I came over the name Positano, and have certainly never been there. I must have just picked it off of a map of Italy. Maybe I liked it because it sounds like ‘positive’. It certainly looks like a fantastic place. In any case, I stumbled over your blog and there was Positano staring me in the face. Since my novel has a lot to do with synchronicity I thought this was a synchronistic kind of event and I figured I’d just share that with you. There it is and that’s that.
Very nice blog, by the way. The figs and grapes look incredibly inviting to this northern soul . . .