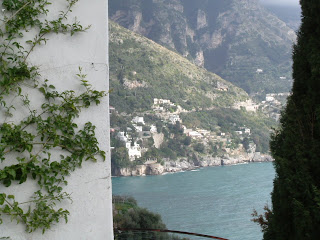 Positano has been bubbling with celebrities in these past few days. Beverley Mitchell from 'Seventh Heaven has her wedding celebrations at Positano and invited her famous friends from the Hollywood scene. They are lodged in all directions in the town and apparently even Madonna was seen arriving at a Villa at LiParlati last night. Jet setter's names thrown about are Justin Randall Timberlake and Jessica Biel as well as the rest of the cast from Seventh Heaven.

Sorry, I have no photos. I wouldn't recognize a celebrity if they walked two inches from my nose. (Madonna or the cast from Grey's Anatomy may be the exception). I only know about Seventh Heaven because of the reruns on Italian and French TV in summer. If they opened their mouth and spoke in English, I would have my doubts that it was them.

I don't always carry the camera with me either. 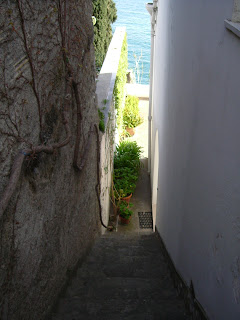 Our house in Positano is next door to a VIPs house, or rather ex-house as he sold it last year.

I didn't know that he was so important, until I googled his name after he left. I knew he had a film coming out soon.
To me, he was just the dishevelled neighbour from next door with whom I would exchange a few words when bumping into him in the morning on his way to grab cornetti for breakfast, or the father of the little girl with whom my son would play with on the beach. My eldest son spent a whole summer in his company as he was 'courting' the girl staying with them and when he asked #him# what films had he directed, he just shrugged off the question.

My husband had known him for a lifetime and his mother would 'you-who' me whenever she heard me coming down the stairs past their place. To me, they were everyday people.

At Easter, a few years ago, I was sitting at the bus stop waiting to catch the bus to the cemetery (one of my favourite haunts in Positano) and Colin Farrel walked past me with his girlfriend. He looked familiar and was attired in a way that attracted attention (as well as being attractive) so I knew he must be 'somebody' . I queried my daughter on my return and she confirmed that he had been seen around town and that all her friends had headed for the beach to seek him out. And I had had him at arm's length without knowing who it was! God knows who else I've ignored like that.
I'm good with politicians, their faces are plastered on the Italian news for half an hour each night and so their image becomes embedded on my mind. My husband has even been asked if he is a politician! But with actors it's a question of being able to see them as ordinary people rather than the role play they have.
We have a local who does occasional gardening at our house and in the summer, he works at a five star hotel. Along with the tomatoes, eggplant, basil and wine from his garden, he also brings me the latest as to who is staying at Positano. I don't usually recognize the names, so he needs to tell me what film they are in too. I'm really hopeless. But at least then , I know who to look out for!
Have any of you seen (and recognized ) famous people at Positano or in every day life?
by Rosa

If colin farrell walked by me I would drop dead from shock...lol.
He's a cutey!

He was so cute - I wish I'd known it was him. I actually had soaked jeans on, because two prankster kids had decided to douse me as I was walking under their terrace, so I decided not to follow him and sat it out instead.

Cathi- Its true that they look so different without makeup on ! They're always wearing huge sunglasses and are looking down with their hair other their face.
Italians look out for Clooney too now that he has a Villa in the North. You are so lucky to see him!

I used to work in a 5 star hotel myself so I have seen and met a lot of them.
And Madonna was NOT here...but Jessica Biel is really gorgeous and one can only say so when you see them without TV/magazine makeup or photoshopping/airbrushing.
Dollyna

Hi Dollyna- it shows that you can't believe what you read in local newspapers! Who else have you met there?

Danny de Vito (funny as in his movies), Kevin Bacon, Julia Roberts, Robert Downey Jr., Marisa Tomei, Hugh Grant.
I have to go now but I've worked there a LONG time so the list could go on.
Dollyna

I've worked in London theatres in the past so, yes, quite a few.

It's not nearly glitzy enough here to attract the A List.

I love your new picture!

Lucy in TO (Canada)

Thanks for stopping by my blog-always loved the show Seventh Heaven, Colin Farrell-GORGEOUS!! How fun to live in a place frequented by celebrities-but why not, it is a beautiful place, and I want to go back!!!