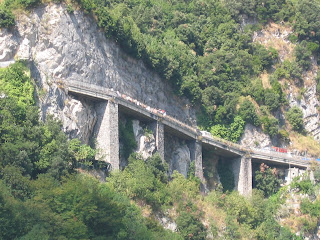 I came across a comment the other day, on a web forum for tourists. The member who had just been on a trip to Sorrento was describing his tour of the Amalfi Coast:
"...Realise that G... Tours have cornered the market in feisty mature ladies as their couriers. This one is a hoot. “We are not allowed to take the bus down here, but we don’t care”. “ We don’t see the four passengers from the Mediteraneo, but it’s time to be off or we will be late at the toilet stop.” That lady could run a railway tour of the Amalfi Coast ".
Doesn't that just sum up the Italian attitude down south ? A new law regarding the non-accessibility of the Amalfi coast drive to these mega buses ('torpedone '-more than 12 metres) has just been enforced this year to help make life more bearable for the locals. These buses create many traffic jams along the coast because it is impossible for the Sita bus to get past them. Positano News just yesterday published an article about the critical level of traffic along the coast and how paralysis along the coastal road affects internal Positano traffic as well.
As John Steinbeck said, tongue in cheek 'Roads are carefully designed to be a little narrower than two cars side by side'.
The skill of the local Sita bus drivers is to be admired the way they just scrape past these monsters by millimetres. The tour organizers are making so much money out of tourists that they don't give a damn about the menace of heavy fines. It's no wonder that the Sita buses are always running late.
by Rosa

Yet another blog that I fall in love with at first sight! Of course it doesn't hurt that the topic is Positano ;)
The header photo is GORGEOUS!

Thanks Annika! My son took the photo from our house.

My main memories of the Costiera Amalfitana was how much I hated, despised and rejected the driving. Argh! I tore a chest muscle driving it. I swore I would return only on a boat, but I have not got richer, so I have not returned.

Every photograph on your blog is a temptation for those without my memories of driving there. I wonder would I like Luxembourg better?

Judith -I have NEVER driven along the coast and never intend to. Just getting about by bus is stressful enough.
Luxembourg driving is a breeze...