I'm a jiggler not a dangler. I like to see what lies beneath me. Especially in deep water. If I can't see right to the bottom, you won't see me on top.


My children are the opposites. Once they learnt how to swim, they went straight for water which is out of their depth. In summer I watch them from the house. They swim out to the end of the swimming area delineated by the tube and float in the water while chatting to their friends who are hanging off the lilo. They dive off jagged cliffs impervious to what might lurk underneath. They'll jump off the boat into deep dark blue waters preferring to throw themselves to the mercy of jelly fish rather than risk a sting from the wasp flying about. There's no chance that you'll find me doing that. Oh no... 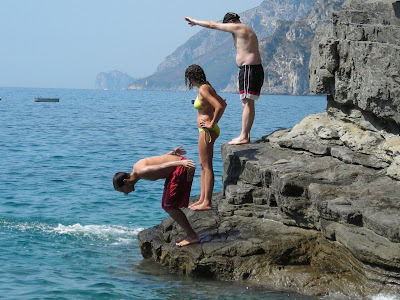 First of all, I'm not a strong swimmer. If I take a dip, it's in the early morning to midday water when the water's at it' clearest. If I go out of my depth, it's on a lilo or with flippers and a mask.

On a lilo the way I use it, it's not easy to get around as I hang off the edge, keeping myself cool in the water. My eyes are open at all times.

I was once floating in crystal clear water, and saw this long thing kind of swimming my way. I jiggled as far as I could from it, and shortly afterwards found it close to me once more. I jiggled away again and realized the thing was following me. I yelled to my husband who said I was being ridiculous because it was just a piece of seaweed being brought around by the current. He swam over and fished it out with his hands. Then gave a cry and dropped it straight away.

It was a sort of hippocampus or a pipefish. Not quite a seahorse, but long and slim with the same sort of mouth. Half dead already and probably thrown into the shallows by fishermen. Not quite what you'd expect when you pick up a piece of sea grass.


I've seen small children become excited when snorkeling along Fornillo beach with their nets, finding moray eels amongst the rocks just off shore. Tiny octopus are picked up in buckets and played with before hopefully being released again. Parents fish out fascinating sea urchins and give them to my youngest son to hold in the flat palm of his hand while the long spines move slowly in a circular motion on the shell.

Our house in Positano is in the enviable position of being high on the mountain but very close to the sea. Sort of like a bird's eye view. That means if the water is clear on the day, we are able to see what goes on underneath.
A few years go, in the morning at around 9.30, I was looking down at the beach and under the water I saw a dark creature loom towards the shore. As it came closer into the shallows, I got out my binoculars and the unmistakable shape of a stingray took form. The stingray waved it's wings and glided around the shore exploring the rocks under water for quite some time. I expected to hear the babble of excited voices from the shore, but there being no one in the water at the time, the stingray was invisible to the sun bathers. 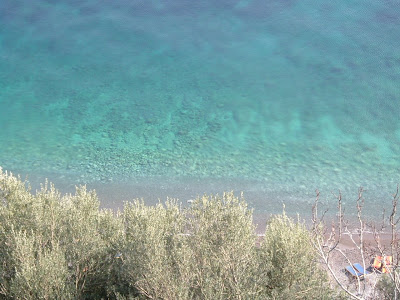 The next day at the same time, the sting ray returned. This time children were splashing about on a lilo . The sting ray wandered around a little, came close behind the children, then seeing them flew off into the deep and never returned. The children were ignorant of the creature who had shared the water with them. I asked at the bar the next day. They hadn't seen it and were sceptical when I described what I'd seen from above, saying that these were animals from the deep waters far away.

I read the sad news yesterday that two dolphins have been found at Positano this week. Both dead. One caught in a net and found at Laurito beach and the other decapitated by human hands. It's beyond me how people can do such a thing to harmless creatures which were once common in these waters and are now on their way to extinction. You can read about it here and here. 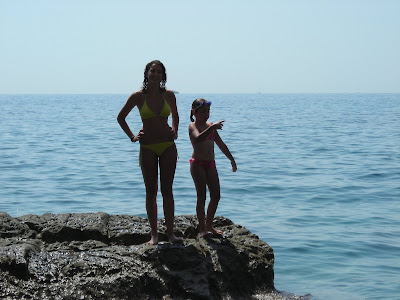 It's a real pity. I'd be happy to dangle with dolphins any time.
by Rosa

Wow! How lucky you are to have a house with such a great view! It is sad about the dolphins, but I am surprised that they were once common in the area! Interesting to know...

That view is fantastic...how great to have a house so close to the sea....

I see you live in Positano...do you read http://nikinpos.blogspot.com/.....
great blog, that is where she lives as well.

Thanks for comment on my blog will call in and read more of yours. :-)

Girl in giro- dolphins have been spotted around Li Galli islands usually by fishermen.
Anne- I know Niki now - love her blog too.

Your pictures are so beautiful! Your so lucky!
I'm so sad for the Dolphins though that is unforgivable.
I guess I'm one of those people who looks in at the water first then jumps in! What's that called?
Have a good night.

And I once had a near-miss with a sea slug in the choppy coastal waters around Climping. Since then, I always wear rubberised bathing shoes when venturing into the sea. Do feel free to copy. Cordially, Mrs Pouncer

Lucia - if you are fearless in the water, I'll consider you a dangler.

Mrs Pouncer - Rubberised bathing shoes are worn by many on the Amalfi Coast, simply because walking on hot pebbled beaches is too uncomfortable.
Thank you for the visit.
Scintilla

Gorgeous photos - I should know, because I was there! Would love to be back there this summer: iced tea with lemon granita at Pupetto's, cold coffee up at the top, sfoglie napoletane from the pasticceria, figs fresh from the orto - and beautiful views at every turn.
Don't miss though the mosquitoes, the pebbles and the smokers!
Miss you all

frizzie- it not too late to book your plane and head on over !