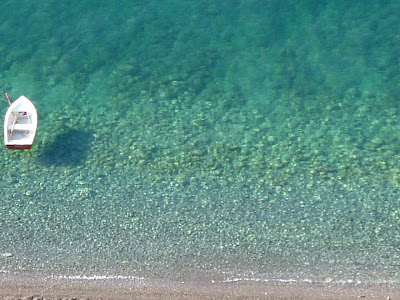 Last year was a good season at Positano. The sea was relatively clean, and jelly fish were not a big problem. Waking up in the early morning, the sea would be crystal clear, as it was on the day that I took these photos, this past week. 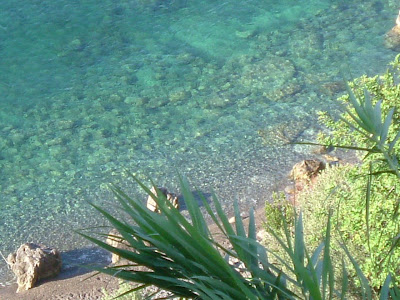 But by the time 10/10.30 am arrived, and I am very very sorry to have to say this, the sea resembled an industrial area in the outskirts of Naples. 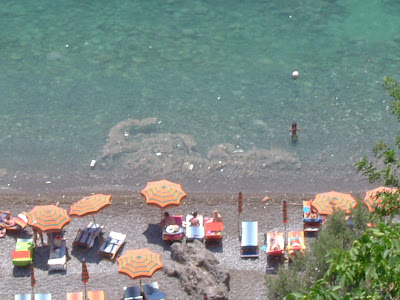 This unfortunately is not uncommon. This is the harsh reality of a place that does little to defend it's natural beauty. Do you know what the Municipality's response to this problem is? 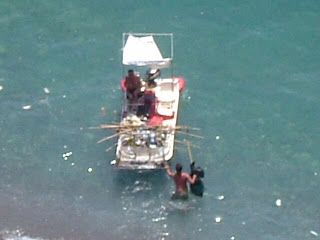 It's this meagre motorized paddle boat with two poor men unable to cope with the extent of the floating rubbish and the area (three main beaches) which they are supposed to keep clean. They come to Fornillo beach every other day around midday. By this time, the debris has extended right along the shore and is impossible to clean.

The tourists visiting, look on incredulous and have their photo's taken wading in the garbage.

The owners of the private beach establishments do their best to fish out refuse close to the shore with nets; meticulously clean the beach of anything washed up during the night and when questioned about the situation confess that they are embarrassed and ashamed -'Signora, mi vergogno' that such a sight should befall their shores. 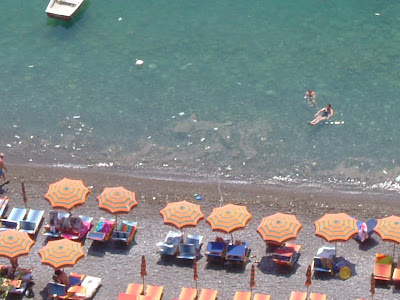 The locals are different. They are philosophical and resigned to this phenomenon.

'Sono le corrente' - 'It's the tide's fault'- currents in the water bring the rubbish in from nearby is the excuse that I hear often.

It's come from a dumping in a local river; it is dumped by the yachts; people are trying to sabotage the tourist industry in Positano; are other reasons that are bandied about.

Whatever the reason, locals are determined to have their swim in the place that they consider the most beautiful on earth. To admit that there is a problem would be admitting that there are faults in the system. They let their children play in the water, waving away the rubbish or swimming beyond the tide of plastic, reasoning that the debris is superficial and that Positano has obtained the Blue Flag for micro biologically clean water again this year.

And again the tourists look on along the shore line.

As for myself , I don't even bother to go down. I would be too embarrassed to show my face and be associated with such a dump.

What would you do ?

I think I would dedicate more people to watch this. The Italians should have severe fines for littering in this matter.

What a sad, sad, shame :( We can't let this natural beauty be ruined like that!!

This is shocking. What a difference between the top and last pictures. I wouldn't want to go down either.

Nice to see you again!
About the problem, I agree with Sally...the pictures tell all:(

This is such a sad sight. I am sad to see such a neglect in the waters there. I agree with you I wouldn't be swimming in garbage if you paid me.

Thanks for the comment on my blog! I'm having a great time reading through your posts and seeing the photos. The first photo of the boat on the clear water is amazing!

My Melange - It's a question of changing their fundamental attitudes to litter too. The menance of fines are not always carried through unfortunately.

Sally- 'Shocking' is the word.

Chiara- Hi! Hope the water is cleaner in Polish lakes !

Katarina- that makes two of us !

Erin - thanks, i'll catch up on your posts too !

Well, we have had quite clean lakes here. By the way, one of the most beautiful Polish regions is Mazurian Lakes (called in Polish "Mazury"). I really recommend you to visit it one day...Greetings from HOT Warsaw!