Snakes are creepy. No, literally. Ok so they don't have legs, but it's the way they arrive, unheard and unannounced on an average, nothing will happen today, day.

I've never seen them in the forest in Luxembourg, although I know they exist. I saw a piece of one once in our garden, probably dropped by a bird, but I have seen them in Positano. Every year. And at our house.

Snakes are not the only reptiles around at Positano. We get our fair share of lizards , gheckos and whatnots all over the house. But it's what makes the news at home. I don't run to my husband and tell him I just saw a lizard on the wall. But when it's a snake on my path, I do.

Our house at Positano is surrounded by gardens. Not only our own, but also the wild, unkempt gardens leading up from the Fornillo beach area. These gardens have plenty of hiding places for wildlife (not always desired) and are probably a touch too shaded for a snake's cool body. They slip up the terraced stone walls, and slide over the edges into the sun, into our garden, our terraces, our house. 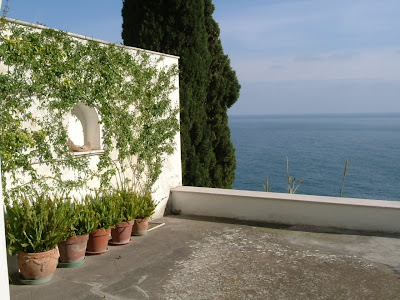 Now, you'll have to bear with me, as all our gardens have been given personal names to distinguish them, as they are mostly terraced.

I have come across snakes sunning themselves on : the terrazza dei Poeti; in mio giardino; nel quadrato (the courtyard ) ; nell'orto (the fruit and veggie garden); nel giardino giu` (downstairs); on the wall where I hang the sheets to dry; on the garden wall in the public alleyway in front of a Residence; and on a path next to a garden when I was laden with shopping bags.

In most of these occasions, the snakes saw me before I saw them, and were able to silently slither quickly away before I stepped on them. At other times, I have been able to watch them from the bedroom window as they bask in the sun.

They are mostly black, and I have been told they are not dangerous. I have seen pale ones with markings on them without being able to distinguish the type, as they move too fast.

I remember when my husband's uncle was living downstairs. He came up and asked for a broom. He said he needed it because a snake had come inside the bedroom and now lay writhing on the floor unable to get a grip on the shiny majolica tiles. Just a push and it was out. 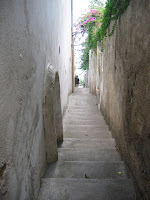 Another time, when my eldest was young, our friend Dodo came to spend a day scuba diving at Positano. Well, they got all dolled-up or rather, wet suited and set off up the stairs on the side of our house to go to the beach.
They hadn't reached the gate of our property, when my eldest came running back and says 'Dodo wants a zoccolo (a hard shoe).'
'What for ?,' I asked.
'Don't know !' he replied.
Bang, bang I heard.
My son came running back,
'Here's the shoe.' he said, 'There was a snake on the stairs and Dodo had to kill it.'
'A black one ?'
'No, a small Viper !'

I had always been told that there were no vipers at Positano only in the mountains. But my daughter's friend confirmed that there were vipers even far from the gardens, right in the middle of town. He lives just off the main road, and they found a viper on the steps outside their front door. The reptile slipped into a hole in the steps and having nothing else at hand, in true local style, they poured bleach into the cavity! I don't think it would have made any difference to the animal. May have slipped out a little paler in the end.

I'm not shedding any skin over this... Just stomp my feet harder before going down stairs.
by Rosa

Well, you've got to take the good with the bad Joe !

I saw a snake in the mountains above Positano last year... a big, fat yellowish snake that moved faster than I thought they could and without making a sound. Creepy.

Hey, I just got an idea - I'm trying to arrange an expat get-together somewhere on the Amalfi coast in July. Do you want to come? There's a thread about it on http://www.expattalk.com !

Annika- just as well he moved away from you!
I'll email you about the rest.

Hi, just returning the visit. Love your header pic, simply gorgeous. I had to go see the Positano webcam too... oh wow. Gorgeous.

I lived in Italy for 3 years many years ago... I wish I had a better memory for all of it. I need to return to visit, I think. ;o)

Thanks for coming Dory!

Your gardens are indeed lovely!!

THank you for your love and support during this time with my dad.